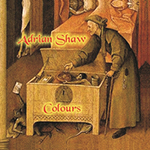 Colours is the seventh solo album by  Adrian Shaw, the legendary bass player (ex-Magic Muscle, ex-Hawkwind, The Bevis Frond, Hawklords etc.). It's been over ten years since his latest solo effort String Theory, but Oxygen Thieves, the album with old band mate Rod Goodway was released in 2009 and Ade has been busy playing and recording with The Bevis Frond and Hawlords among other things. I have always admired his ability to write interesting, psychedelic, enjoyable and yes, even catchy songs and he of course is a killer bass player who can also sing and play many other instruments like guitars, keyboards, drums, lap steel and mandolin. On this brand-new CD he is accompanied by Frond drummer Dave Pearce (on "The Question of Life), his son Aron Shaw (guitar solo on "The Divine"), the great Bari Watts (lead guitar on "When I'm Gone" as well as another old friend Pete Pavli (viola on "The Dream").

The quite heavy, great mid-tempo opener "Colours" is definitely a reminiscence of the original hippie times in the late 60's. You know, the free love, dope, experimentation in music, art etc, revolution, all that.  Ade remembers the highs and lows for sure... "A Clean Slate" is a beautiful track that also features acoustic guitar, killer solo guitar, heavenly keyboard melodies and other cool things. "When I'm Gone" is a shorter, heavy psych rocker in The Bevis Frond style and Bari of course shines as always. "At Last" starts of with some orchestrated stuff but is then quite normal but (very good!) mid-tempo rock. "The Divine" is shorter, rather hypnotic hard rocker in 7/8 with very cool harmony vocals. Aron's guitar solo is perfect for the song! The blissful folk song "Going Home" is just wonderful stuff... "The Dream" is a very melancholic, atmospheric, slow and a bit dark piece and Pavli's viola adds some High Tide vibe I think. Excellent. "Be Not Weak" is one of the most psychedelic tracks on the album and reminds me of "Tomorrow Never Knows" by The Beatles. It has a similar beat, backwards sounds etc. and you really can trip to it. Next, "So It Goes" is a nice, melodic mid-tempo piece that I really like as well. The album is finished with the slow and melancholic "The Question of Life" that has an experimental beginning and Vocoder vocals and some other trippy effects. Cool! A great way to end this superb album. Be sure to check this out if you are into good, deep rock music with a psychedelic edge.