The Chemistry Set: The Endless More and More 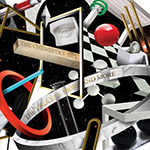 The Chemistry set from London, UK, were one of the pioneers of the neo-psychedelic scene in the late 80s/early 90s. They have been more active again during the recent years releasing three singles on Fruits de Mer / Regal Crabomophone and also playing live. Strange enough, The Endless More and More is in fact their first actual new studio album for decades. Most of their other releases have been singles, EP's, Mini Albums and compilations. This superb new album was carefully recorded and mixed during the recent years and includes some songs from their vinyl singles on Regal Crabomophone, but not all of them. There are 12 tracks on the album that lasts for 55 minutes which might have made it hard to fit it all on one vinyl.

The album starts of with the marvellous unreleased new track "The Splendour of the Universe". This band really has great and catchy melodies! A perfect pop psych song with vibes from the 60s, 80s and 00s, if you ask me. "The Fountains of Neptune" is a bit more psychedelic and hypnotic and rocks a little harder which is great. Another winner! "Internal Rescue" has some The Beatles / The Byrds vibes and again excellent melodies. "Time to Breathe" was released as a single in 2012 and it's a more peaceful, dreamy and atmospheric track with cool psych effects and a hazy mood. The sort of garage rock / pop styled "Come Kiss Me Vibrate and Smile" (the B side of the aforementioned single) should have been a huge hit in some alternative universe, and probably was. Very catchy indeed. I must also say that I love the band's harmony vocals... On "Winter Sun" the band cools down for a beautiful, folky ballad mode with acoustic guitars. "Albert Hoffman" is one of the trippiest songs on the album and a great homage to one of the most important figures in the psychedelic circles... I think I can hear some early Pink Floyd in there. Mind-blowing! "A Cure for the Inflicted Afflicted" (from Elapsed Memories 7") is more energetic and brings to mind The Stones. "The Cranyon of the Crescent Moon" is a typical, melodic neo-psych pop candy, and "Crawling Back to You" a piano-driven thing in the vein of Lennon/McCarthy. "Elapsed Memories" is a melancholic, touching, gorgeous but also rocking song that makes the cold shivers go though your spine, it's just so good and one of the highlights for me. The last track "The Open Window" is more mysterious and mind-expanding stuff with some Eastern influences, and a great, mesmerizing way to end this stunning album. Please do yourself a favor and pre-order this beauty right away so you won't miss out. Essential stuff for all lovers of great melodic psych pop / rock!