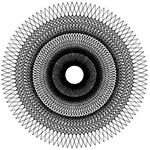 This will be the first picture disc vinyl with Fruits de Mer Records. Since the music is very ambient, peaceful and atmospheric in nature, it will be released on their sister label Strange Fish (remember the five instrumental albums released in 2013 and Craig Padilla's 2LP Sonar the following year?). Michael Padilla (no relation to Craig...) is best known as a member of psych rock/dream pop band The Soft Bombs, but here he uses just sampler and a looper pedal to create very soothing, minimal and meditative soundscapes. There are one longer and one shorter instrumental track on both sides, and the free CD will also have a fifth extra track that is not available on this promo CD-R I'm just listening to.

Now, I must say that I don't listen to this kind of ambient music that often, but every now and then it's worthwhile to lay down, put your head phones on, relax and float away from all the troubles and stress of this world with some cosmic ambient sounds, and Atmospheres is great for just that. You can also use it as peaceful background music while reading for example, and it's not total drone or anything and also has some melody to keep you focused, so you can enjoy it in other ways too I guess. It could also be used as a soundtrack music for some film. If you are one of the more rock/pop/song oriented Fruits de Mer fans you might get a bit bored with this one, but if you enjoy ambient instrumental music like Eno this is definitely for you.