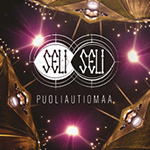 Seli Seli is a fresh new psych rock band who released this debut album of theirs a few months ago. They have a very pleasant, hypnotic and dreamy style that sometimes gets a bit heavier but mostly they are mellow and mesmerizing. Just the kind of music that should be listened to eyes closed and mind open. They do label themselves as inner-space rock band and I think that's a perfect description. The quartet (singer/guitarist, guitarist, bassist/backing vocalist and drummer/backing vocalist) is enhanced for the album with a female backing vocalist (on "Langat", "Rotat" and "Unessa") and organ player (on "Unessa").

The album starts off with the excellent, hypnotic and dreamy "Langat" that has airy and psychedelic delay guitar work and a nice, mid-tempo beat. Some of it brings to mind Kingston Wall a bit. The vocals are in Finnish, which is not that typical for a band like this, but after a while I got used to that and they are actually very good. The organ (sounds more like a keyboard to me) is a great addition to the floating atmosphere, and there's also some fuzzy lead guitar, but it's not too aggressive. Very cool! The title track "Puoliautiomaa" is definitely one of the most rocking and heaviest piece on the album and I can hear echoes of Loop, Mana Mana and other heavy, hypnotic guitar psych bands, even Hawkwind! The track cools down a couple of times, which works fine. One of the highlights for me! On "Värivaloissa" the band mellows out again what comes to the guitar sound, but the track has a steady, krautrock style motoric beat. I love it when the track grows later on for the guitar solo, some heads are going to explode! "Rotat" is a Circle styled, a bit heavier, hypnotic krautrocker and the most intense song on the album. "Unessa" is more atmospheric stuff again, but another great song, and has a cool, melodic ending that brings to mind The Soundtrack of Our Lives or something like that. The album ends with "Laulu menneestä elämästä" and this one has a strange, jazzy beat and differs quite a lot from the rest of the tracks. Maybe something that Kauko Röyhkä or Tuomari Nurmio might have done after some mushrooms? Some cool lead guitar towards the end. All in all, this is a great debut album from a young band and my only complain is that it's not out on vinyl (yet...). Can't wait to hear some more, Finland and the whole universe needs bands like this! One of this year's best Finnish releases.