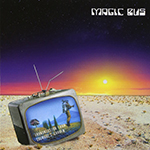 Magic Bus is an English prog rock group who combine the sunny, relaxed vibes of late 60's US West Coast to the more progressive, jazzy and adventurous sounds of Canterbury bands like Caravan and Soft Machine as well and Yes and Camel, just to name a few. The band includes two guitar players (one is also a vocalist), a keyboards player, bassist, flute/recorder player and a drummer. Most of them also sing backing vocals which is essential in this kind of music. Transmission from Socmore's Garden was released last year following their 2010 self-titled debut. Both albums are sadly only out on CD, and I do think they deserve a proper vinyl release... They do also have two marvellous 7" singles out: Magic Bus (Static Caravan 2011) and Seven Wonders (Regal Crabomophone 2015) that I recently reviewed over here.

The albums starts off with the cheery "Sunflower" that sounds very much like '67 San Francisco. Some nice organ and guitar solos at the end! The excellent "Ballad of Lord Sogmore" gets more progressive and reminds me of Caravan and Camel, I love it! The vocals are superb and melodies just magical. "Cosmic Rays of Dawn" is a pretty laid-back, mellow song that also has some folk influences. The bit longer "Three Days" has a nice, sunny vibe and also some jazzy prog sections. The longest track is "Jupiter 2 AM" at 8:37 and it has some wilder/heavier Yes/King Crimson elements in addition to the strong, atmospheric Canterbury vibe. Wonderful! Another highlight for me is the beautiful single track "Seven Wonders" that has a magical mood. "Morning Mantra" is a perfect mix of The Beach Boys and Canterbury scene, and the final track "Earthpod" somehow brings to mind The Moody Blues (it's probably the Mellotron sounds...) which definitely isn't a bad thing. All in all, this is a very pleasant album full of great melodies, talented musicianship and adventurous song structures and keeps you interested for the full 46-minute journey. Have a try!