Friends of the Fish 7 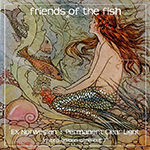 This is a very limited lathe-cut 7" vinyl single that will be out next month on Fruits de Mer's sub-label Friends of the Fish. Only 50 copies will be on sale for those on the Fruits de Mer mailing list (and I guess the bands will have some too). Okay, I got to say that The Bay City Rollers was definitely not a band I would expect to be covered on a Fruits de Mer related release but that will happen anyway, and this really isn't the first time I'm surprised. Well, to be exact "It's a Game" was originally written by String Driven Thing, but The Bay City Rollers made a hit out of it. Ex Norwegian is a new band to me (as well as for Fruits de Mer), and are from Miami Beach. Maybe the sunny atmosphere explains this very happy sounding cover version that's almost disco. Somehow the band still make it sound like it belongs to the Fruits de Mer catalog, well done guys. The song sure has some great, catchy melodies, and the execution is spotless. On the flip side we have Finland's own Permanent Clear Light who have amazed the audiences with their Fruits de Mer single/compilation appearances and debut album Beyond These Things. Their original "Cornerville Skyline" is a perfect psych pop track and has a very nice, cheerful mood. The 60s influence is very obvious, and I love the vibe of this melodic, emotional masterpiece. Can't wait to hear their second album sometime nest year!

Having sadly missed the two first lathe-cut singles in this series (CD-R promos reviewed here), I really hope I can get this one somehow, but I know the demand will be huge all over the world for such a collector's item... Good luck!