Vespero: Careful with the Axe, Eugene 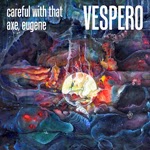 I’ve been a fan of this Russian band since I first heard their first studio album Rito in 2007. Their studio and live albums include everything from progressive rock to psychedelic rock, atmospheric post rock, hypnotic kraut rock and space rock and I love it all. On their first 7” single (if you don’t count the Fruits de Mer Annual 2013 split with Temple Music) the band performs two cover versions by one of their biggest influences: Pink Floyd! Okay, Floyd has of course been covered time and time again for decades, but I really dig these versions of two excellent instrumental by one of my favourite groups. Vespero covers both tracks just perfectly honoring the vibe of the originals but still making them definitely their own. First, we’ve got “Careful with the Axe, Eugene” that was originally released as a B side to “Point Me at the Sky” single. This is a legendary track that many people also remember from the live disc of Ummagumma and the Live at Pompeji video. This almost eight-minute version is very hypnotic and mesmerizing and has great organ work and a nice guitar solo when it grows towards the end. On the flip side there is a rendition of a Meddle track “One of These Days”. Especially this one has been somewhat transformed and it sounds a little more modern than the original but also even more psychedelic! Excellent job. This is a very good 7” and a must have for all Vespero fans as well as Pink Floyd fanatics and Fruits de Mer collectors.