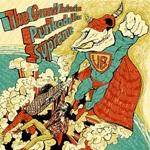 This St. Petersburg based stoner/metal/grunge/indie/punk whatever band seems to be on tour all the time, but sometimes they also find time to go into a studio. Their sound gets more and more varied with every release, and this new album sounds more progressive but at the same time this is also rather accessible and even mainstream stuff to a certain degree. Kamille plays some killer guitar solos, and he has 13 guys to help him out, like Jaire from Octopus Syng playing sitar on the great “Space orchid vs Massive Drumkit” that was already released on vinyl by Fruits de Mer/Regal Crabomophone earlier this year.
The album starts off with the short, folk/country styled “Welcome to the Club”, and then it’s time for the very energetic, even hyper-active “Slave of Two Masters” that has lots of different parts that only the Russians would ever put together. Its eight and a half minutes are a bit too much for me, to be frankly. “I Know” is a more peaceful, beautiful track that I do like. The title track “Punkadelia Supreme” has a nice, little mystical vibe at first before it starts to kick as seriously. Later on it gets rather weird and psychedelic. Kamille’s vocals are much more successful on album than live. “Street Credit” is stoner rock with pop melodies and Iron Maiden styled guitar solo part. My favourite track is “Space Orchid vs Massive Drumkit” that begins as mystical, Eastern-tingled folk and then goes into space rock territories. Great! “Dropping Aitches” reminds me of some grunge bands or even Faith No More which is not good… I don’t really like “Feels Like Home” either, but the sometimes bluesy, longer instrumental “To Cross the Rubicon” is a lot better and also includes some atmospheric parts to cool you down. “King Has Left the Building” even has some funky vibes, not my cup of tea really. “Visualize” is quite progressive with its heavy riffs, and starts to rock tightly in the middle. The longest track on the CD is the 13:40 long, dark “Score” that has some nice spacey synth sounds and lots of different moods. A very nice track! Then there’s just the short, peaceful outro “Intermission” and 77 minutes are gone. This album needs some time but you will probably find it rewarding after that. Try it out!