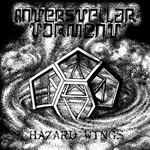 Hazard Wings from Kajaani is a new Finnish punky, garage space rock band that played their first gig early this year in Helsinki. I was immediately blown away by their psychedelic, very energetic show that combined the space rock of Hawkwind to the high-octane blasting of MC5, The Stooges and maybe even The Dead Kennedys in a very hypnotic and mind-blowing way. The band is a brainchild of singer Vesa Moilanen, who has been in punk, hardcore and black metal bands before and now lives in Helsinki, I believe. After the show, I asked for a review copy of their very limited vinyl album recorded in 20011 and also got a CD version of it that I gave to Walter at Roadburn to see if he might be interested to book the band for the festival next year but I guess nothing ever came out of that. Well, at least my review will finally see the light of day now! There’s also a cassette version limited to 40 copies…

The album is just over 35 minutes in length, but I think that’s enough. The sound is just a bit too muddy and low-fi, but I still enjoy very much listening to this. The release is full of feelings of alienation, angst, anger, mental disorder and being fucked-up and warped-out beyond recognition. The fast and furious “Time Will Be My Grave” starts off the album and offers no mercy. The spacey analogue sounds are just perfect match to the hard-hitting, simple but highly effective punk rocking and Jello Biafra –styled vocals with almost lethal amount of delay. Then the band gets into slow, doomy and hypnotic grooves in “Bring the New Horror” and the spacey, swooshy sounds really fuck up your brain. “Death Machine” rocks fast and hard again in the punk rock style, and the psychedelic space sounds never fade out… “Tomb” is a darker, more experimental and atmospheric short instrumental piece that has its function and then it’s time for “Bone Idols of the Desert Planet (Part I)” that is again slower, gloomy and hypnotic stuff. There’s also some guitar soloing and Mana Mana vibe in there which of course is great! “Bone Idols of the Desert Planet (Part II)” has the same gloomy, ice-cold and mysterious feel to it and also some organ and I like it. The hardcore/punk gear is back on for the two-and-a-half-minute blast that is “Blind Horse / Castaway”. The last track “Kohti Reunaa” is sung in Finnish and is droney, harsh, very psychedelic and experimental stuff that just might bring you over the edge. I really hope to hear more stuff by this band also see them live again, but I’m not sure how active they really are with this project.