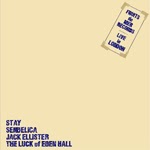 Each year Fruits de Mer Records want to reward their loyal followers who have been buying all or at least most of that year’s releases. In the past the freebie has been a tape or a CD-R, but this year it’s a genuine vinyl item for the first time! And what a wonderful Christmas present this is. The 7” EP includes four tracks recorded live at the Summer Fruits de Mer All-dayer at the Borderline in London. This event definitely was one of the most interesting music happenings in the UK this year and I’m very sorry that I couldn’t take part due to another trip. The All-dayer featured five live acts that have been releasing stuff on Fruits de Mer: the legendary Pretty Things, Stay from Spain, The Luck of Eden Hall (on their first tour outside of the US!), Sendelica from Wales and Jack Ellister from the Netherland playing a solo slot. The Pretty Things are not included on this EP because they are planning a full live album, but there is a song by all the other four bands/artists.

Jack Ellister starts off the EP with his own, folky song called “Old South”. Very intimate, nice feeling and Jack proves that he can play some excellent acoustic guitar and sing. Stay’s “I Don’t See Myself” is a quite energetic, 60’s styled garage/mod freak-out that has some The Who vibe (love the cover art, by the way!) and a rather progressive, psychedelic jamming part. Great organ on this one! The guys of Sendelica create their own, instrumental version of Pink Floyd’s “Set the Controls for the Heart of the Sun” that also has some saxophone. This is very hypnotic, trance-inducing stuff for sure! Then it’s time for some psych rocking. “Lucifer Sam” is one of my favourite Pink Floyd songs and The Luck of Eden Hall do a raw, mind-blowing rendition of it. There’s even some Mellotron there I think, as well as lots of spacey noises. Wow! If you really want to have this 7”, you can try Heyday Mailorder, since Nick still seems to be stocking a lot of this year’s Fruits de Mer releases but it might be too late already…