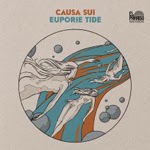 Causa Sui from Denmark started out as a stoner rock band releasing their two first albums in 2005 on Nasoni and in 2007 on Elektrohasch. Since their Summer Session 1-3 series that was originally released on three separate vinyl albums in 2008 and 2009 the band has definitely proved that they truly are something more than just another stoner band. They started to improvise and jam a lot more and took their influences from a vast array of different kinds of music like jazz, psychedelic rock, prog etc. They have also dropped all the vocals and now focus on very inspired, highly skillful and emotional instrumental performance. They started their own record label El Paraiso Records that has made possible to also release music by their other projects and collaborations, individual band members and friends that include the amazing Paper. Causa Sui’s Pewt’r Sessions 1 & 2 in 2011 that also featured Ron Schneiderman from the US band Sunburned Hand of the Man saw the band getting into even longer jams that were totally amazing an mesmerizing. On Euporie Tide the tracks are a bit shorter and more to the point without losing any of the psychedelic, hypnotic nature.

The limited 2LP (also on blue vinyl) and CD include ten tracks in total ranging in length from under two minutes to almost 11 minutes. You still get a few heavier, more stoner rock sounding tracks like the long, great opener “Homage” that sounds a bit like Colour Haze or the groovy Brant Bjork-like “Boozehound” and they still know how to create heavy, on-your-face guitar riffs, but pieces like “Echo Springs” sound more like Miles Davis jamming with very stoned Neu! or something. There’s definitely some Hendrix in the vibe as well. There are quite a lot of keyboards to give the music more texture and the band really has sense for melodies and dynamics. There are also some more acoustic moments like the short and very positive sounding “Fisherlscher Sun”, and “Sota El Cel” is just a short ambient piece. It’s really hard to pick up any favourites since I really love all the tracks here. One highlight still is the ninth track “Euporie” where the band really brings the listener into state of psychedelic euphoria. Excellent! I also fully enjoy the peaceful, blissful final piece “Eternal Flow” that sums everything up in a very nice way and brings to mind the mescaline visions of Black Sun Ensemble. Absolutely one of the best albums this year!