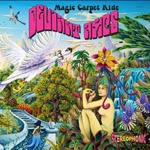 Deviant Amps is a psychedelic indie rock trio from Essex, UK. They have been playing live with some great bands like Here & Now, The Damned, Vibravoid, Hawklords, The Sweet, Gunslinger etc. since their first started in 2006. Magic Carpet Ride is their second album and they also have one EP and download only cover of “Walking in the Air”. All the tree members are veterans in the UK indie rock scene and guitarist/singer Paul Woodright is one of the organizers of Kozfest. The band’s music has lots of different elements: certain 60’s power pop/The Who influences, some early 70’s Hawkwind but mainly the 80s/90s shoegazer stuff. Sometimes they get spaced out, but the music is really not THAT psychedelic most of the time.

There are 12 relatively short tracks on the CD-R. “A Star and the Moon” starts off things in a rather fast and energetic mode. Nice melodies as well. “Magic Carpet Ride” sounds quite a lot like The Who or Teenage Fanclub, but there are also some spacey synth sounds in there to make it a little more interesting and psychedelic. “If You’ve Got Yours, I’ve Got Mine” reminds me of early Sun Dial with its groovy beat and that’s definitely not a bad thing. The same goes for the next song “Shine On”. “And Then I Glissed her….. Don’t Look into the Sun” is one of the most psychedelic, space rock like tracks and also my favourite. This rocks and blows your mind! The main riff is quite close to “Master of the Universe”. They cool down a bit for “Trick of the Light” that also has some keyboards. It does grow towards the end, though. Very nice. “Rope for the Hangman” is a sort of a ballad in Neil Young vein, and the beautiful “Give It All Away” and “Scars” again bring to mind some 90s UK shoegaze bands. “Keep on Pushing” is like Teenage Funclub mixed in with some paisley/garage vibe. “On Our Way” is a powerful, very nice song with lots of guitar that has a great mood and brings to mind early Telescopes or Sun Dial. The album ends with the two minute “Magic Carpet Ride (Reprise)” that has some excellent psych guitar work, wild rhythm section and spaced out synths. A very nice, jam-oriented ending! I’d love to see these guy go crazy live, but the studio stuff works too.