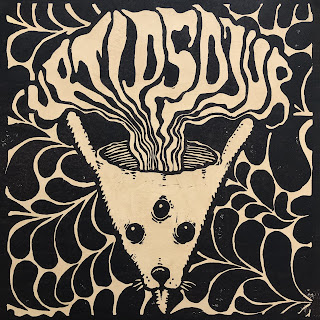 Urtidsdjur is a new quartet formed by young guys from Uppsala, Sweden, playing real, 70s styled retro rock. They say they are influenced by Bo Hansson, Dungen, Atomic Swing, Slowgold and Den Stora Vilan. They also recorded a Neil Young cover for the album but didn't get permission to release it, unfortunately... I can definitely hear more Neil than Dungen in their sound. Occasionally they go for a bit more progressive or psychedelic side but not that much though. The vocals are in Swedish like Dungen's. This is their first album and released soon as a very limited edition on vinyl with cool, hand-printed cover. Digital release will follow next year.

The album recorded in a small chapel in the countryside has nine songs. The opener "Karta & kompass" is a nice, melodic 70s rock piece with strong Neil Young vibe. The acoustic guitar adds some folk rock vibes and there's also a cool sax solo. "Väntar på riktning" is a slow, long and moody piece that I also enjoy. "Vandringssång" has some 70s Swedish progressive folk/psych rock feel, not bad at all. The next, emotional piece "Klockor klämtar" has some The Doors vibes and a guest slide guitar player. "Luftslott" is like a standard 70s Neil Young rock song. Some cool guitar slicks! The beautiful "Människa" also has some (little out of tune...) piano and flute, one of my favourites. "Olyckskorp" is a slow, bluesy rock number with again some slide. "Hitta Hem" is a slow, dreamy song in 3/4, I guess this is where the Atomic Swing influence comes through. Slide in use again as well, nice. The album is finished with the pretty, moody and hazy instrumental "’Eḇen ha-‘ezer" that I really like. All in all, an excellent debut album by these young dudes and recommended for those you enjoy real, not too polished or auto-tuned rock music inspired by the early 70s vibes of Neil Young and others.