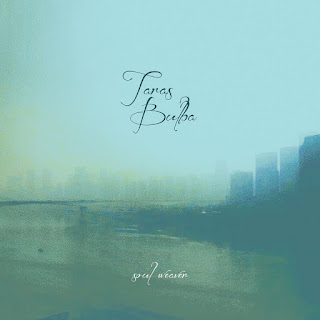 Taras Bulba is a new project by Earthling Society leader Fred Laird and drummer John Blacow. I got to be honest and say that I wasn't that thrilled about their first, more experimental album One that came out last year. The Three Gates Dub tape/CD-R was way more psychedelic and interesting but, well, dub. I liked it though! But when I first heard this new one called Soul Weaver I was instantly in love. Due to the virus lockdown Fred and John couldn't organize drum recording sessions so this album ended up more or less as Fred's solo album using some old rhythm tracks and new constructed ones. The music is stylistically quite different than before, sort of guitar driven, dreamy shoegaze psychedelia. Some of it even reminds me of Earthling Society that I've been a big fan of since the debut album! The lyrics were inspired by the writings of Dion Fortune, particularly her novel "The Sea Priestess".

The album starts off with the hypnotic, fuzzy mid-tempo "Fishcat Mother", just wonderful! Fans of The Brian Jonestown Massacre will dig this for sure. "The Moon On The Tides" has some folk music elements but also walls of effected electric guitar noise. A bit shorter "Goatfoot on Owl Hill" has a very weird, dark folky/tribal atmosphere... Cool! Then we are treated with the nine-minute mind journey called "Tethered on The Wheel". It starts off with some beautiful classical guitar and dreamy vocals. I just love the vibe! Some noisy electric guitar is added occasionally to a great effect. The instrumental "Sun and Steel" begins with rather minimal sound effects and is a sort of experimental, psychedelic sound collage type of affair. The album's longest piece is the 14-minute "Catch a Falling Star" where Fred really takes us to another plane with his dreamy, hazy and hallucinogenic soundscapes and melancholic melodies. The track grows towards the end in a great way! A true modern psych rock masterpiece, I'd say. Starting and ending with some water sounds the beautiful and peaceful "The Blistering Of Summer Heat" ends the album in a very psychedelic manner... First it's mostly acoustic but more intense elements are added in the middle... Phew! I must add that the amazing album cover art suits the atmosphere perfectly just like the turquoise clear vinyl.  All in all, Soul Weaver is definitely one of the best psychedelic albums I have heard this year and will leave the listener in a dreamy, other-worldly state for a while just like good psych should in my opinion. It's all about escapism and other dimensions, baby. This will be a future classic in its genre.