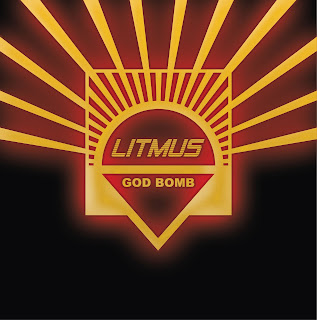 Wow, the first 7" from the UK heavy space rock behemoth Litmus! I've been a big fan of the band since the debut album You Are Here released in 2004 (now how about putting that one on vinyl too?) and have also been lucky to see their energetic live performance a couple of times. They combine psychedelia, space rock, metal and punk in their music in away that only a few others can. The main trio of Martin, Simon and Marek is still intact now with an addition of a guy called James on keyboards. He's been playing with the band live since 2012 but this is the first official release for him. As the band's motto goes, they are always changing, always the same, and it fits very well on this single as well.

So we have two new songs here, presumably taken from the forthcoming new album. Both are just 3:30 in length so perfect for the single format. Litmus are not exactly known for short tracks, so there's a change here for sure... When you put the A side on, you instantly recognize the band, though. Driving beat and bass, crushingly heavy guitar riff and those repeated, powerful vocal lines together with cool mellotron, it's got to be Litmus! "God Bomb" is a winner and a perfect, simple but very effective single track for the band. The faster, punky B side "Post Sonic Age" rocks like hell! The catchy chorus elevates the track to another level, a future live favourite for sure. They even find time for a guitar solo. The production is super tight even based on this pre-release MP3 so I just can't wait to get the final (slightly delayed) black marbled vinyl on my turntable! This single is released on the band's own Litmus Music label so get it directly from the band's website. You know you want it!