Duncan Harris – On Track: Hawkwind – Every Album, Every Song 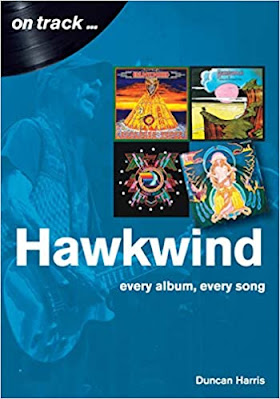 I bet it's not a big surprice to anyone that I'm a huge Hawkwind fan, have been for the last 30 years. As the inventors of space rock and one of the main players in psychedelia as a whole their importance from the late 60s onwards has been massive to the undrground culture and music in general. They have been influencing whole generations of musicnauts from different scenes like punk rock and techno. And they are still rocking!

There are lots of books written by Hawkwind and I have read most of them. This one is another volume in the On Track series, and why not. Maybe there is not much one can add to the Hawkwind saga already put on paper but there are always new ways to present the story. There are also always people who start their journey into space right here with this particular book. So I think the publishing of this book was a good idea, even though it might not give much new data to long-time Hawkwind fanatics like myself.

Duncan Harris goes through most of the studio albums of the band as well as (only) three live albums. He has also included Robert Calvert's first solo album since it more or less features all of Hawkwind as well as the studio album recorded as Hawklords. It is understandable that he could not include ALL the possible semi-official, unofficial, released under a new name etc. releases since there are hundreds of those! The core albums do just fine.  He has divided the story into nine chapters: Dawn of the Hawks, Day of the Hawks (1971-1975), Charisma and quarks (1976-1979), Measles and Heavy Metal (1980-1982), Night of the Hawks (1983-1991), Oldie Rock, or, how Iron Maiden saved Hawkwind (1992-1998), War of the Hawks (1999-2006) and Hawkwind Ascendant (2007-). The story starts from the first gig as Hawkwind Zoo and debut album recorded with Dick Taylor of The Pretty Things and ends with the 2019 album All Abroad the Skylark. I like the way Harris defines every track in a few sentences capturing the essense of them. I might not always agree with him on all aspects, though, but most of the time I do. Occasionally, he has included out-takes/ bonus tracks on later CD editions. Also lyrics, album cover consepts, personnel changes and a lot of other historical issues are dealt with, when suitable. Every band book has to have some pictures and we get some tasty live ones in the middle where also the album covers are pictured.

All in all, I think that Ducan Harris has done a great job here and surely knows what he is writing about. I'm sure all fans will enjoy reading this book and it would also be a great place to start your Hawkwind journey. Warmly recommended!