Various Artists - From a Distant Shore - 4 Species on Display 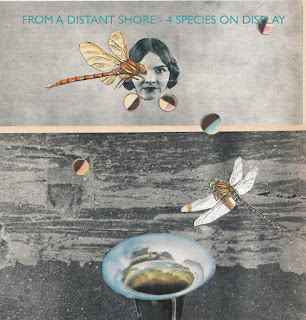 This is a cool compilation of new Swedish music put together by one of our favourite Swedish psych folk acts Us & Them. I must admit to never have heard of the other three bands/artists that are Astor Wolfe, Internal Planet and Eve and the Last Waltz. But of course, I'm always looking for new sounds so this sounds like an interesting album right from the start!

Us & Them starts off the album with the nice, not very psychedelic folk piece Among Antiques. Always a pleasure! Astor Wolfe is next with the sort of British traditional folk song sounding "Emerald Green". Nice female vocals here as well. "Frame of Reality" by Internal Planet brings to mind some of the more peaceful tracks by Peter Hammill of Van der Graaf Generator. Eve and the Last Waltz performs a song called "Could Never Sleep" next. This one has also some dirtorted guitar and organ. A bit noisier affair. Us & Them take us back to the soft dreamland with the beautiful "In Between Time", just wonderful. Astor Wolfe returns with the peaceful and pretty folk ballad "Heart of Pebblestone Beach". Just acoustic guitar, harmonium and male vocals on this one. Internal Planet gives us some relaxed country rock with "Defining Moments". Eve and the Last Waltz sounds a bit like female Leonard Cohen on "Waltzing Crows Birds". Okay, time for the last round and this time in a bit different order. Astor Wolfe's "Liontine Looking Glass" is a beautiful, simple, British sounding folk song. Then comes the album's longest (7:08) track "The Intruder" by Internal Planet. It seems like a somekind of a ghost story and even has drum beat after the spooky intro. Again I get some VdGG vibes, not bad at all. Eve and the Last Waltz's "Reflections" is a bit more powerful than their previous numbers and also has drums and electric guitar. Us & Them end this fine compilation with their beutiful and uplifting "Roller Coaster". Great!

First when this release was announced I thought without a doubt that it would be an LP release. Then it seemed to be only released on digital format at Mega Dodo Bandcamp site. I was surpriced to receive a physical copy (a CD-R in a jewel case with no extra information apart from the track details) with my recent order, so at least that exists as well. But let's hope From a Distant Shore will also see an LP issue soon enough! This is great music for those Autumnal twilight moments.