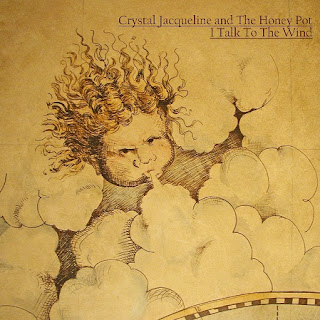 Crystal Jacqueline is without a doubt one of my favourite female singers from the U.K. at the moment and together with guitarist/arranger etc. Icarus Peel they can do some psychedelic sonic miracles. This time they have interpreted five classic 60s/early 70s tracks for a cool double seven-inch release.

The excellent double EP starts off with a soul-tingling version of Traffic's "Mr. Fantasy". I'm in heaven already during the intro! This one has very cool, authentic 60s vibe but with modern sound quality, not easy to achieve. The Mellotron etc. of course helps! Amazing stuff, anyway. Things are going to get even better with the beautiful "I Talk to the Wind" originally released on the debut King Crimson album in 1969! Ah the flutes, the vocals, again the Mellotron and everything else... Just breath-taking! A few years ago, I was happy to score a cheap single called "Zabadak" by a 60s bunch named Dave Dee, Dozy, Beaky, Mick and Tich. The A-side was okay pop psych that I remembered hearing before but the main issue here was the trippy, hypnotic, Eastern-tingled B-side "Sun Goes Down". This was a winner for sure! It's good to hear a bit darker, fuzzier song here as well. Rare Bird's "Sympathy" has been covered many times but not recently, I think. Great, melancholic song and a superb version too. The double EP is finished with an eight-minute "Dreams" by Tonton Macoute and I don't think I've ever heard this song before. It's a good choise to have one song with also some male lead vocals to give the EP some more variation. This version is twice as long as the original... Wonderful!