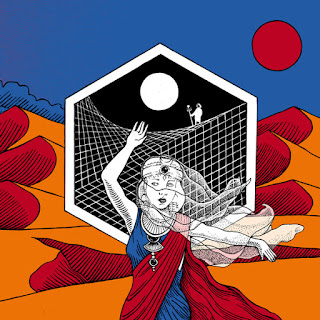 Kosmodysseia is the new album by Finnish heavy progressive/psych rock band The Fërtility Cült. This Tampere-based band has progressed and grown a lot in a few years and now seem to be annual performers at Fruits de Mer Records's Crabstock Festival in Wales. In addition to the standard rock instrumentation and great vocals their sound is heavily saturated with Hammond organ, Rhodes piano and saxophones making them sound rather special at least in Finland at the moment. There's also some cello and violin on the album. The new album seems less doom metal and more progressive rock which is definitely a good thing this time but there are still some heavy, gloomy parts in there.

There are seven, mostly long tracks on the album. "Kosmodysseia Part I: The Planeswalker" starts in a very peaceful and moody style. Later on things get darker and heavier and I'm reminded of some of the other great, modern adventurous prog/psych bands like Astra, not bad at all! "Return To The Desert Planet" rocks faster at first before it starts to float in hazy space. Then we get some slow, doomy Black Sabbath going but the sax keeps things jazzy. "Star Siren's Song" is a great heavy prog tune sounding a bit like mixture of VdGG, Uriah Heep, Gentle Giant and Sabbath but with a personal touch of their own. Great! "Visions of Home" is a short, orchestrated song with strings and vocals, but on "Hunters of Galactic Daemons" the band returns to heavy, doomy prog rock vibes. I love the groovy, faster middle part that reminds me of Gong. The eight-minute "Kosmodysseia Part II: Timeless Ithaca" has a hypnotic, dark atmosphere that gets you in a trance. Some more light-hearted prog rocking follows. Cool soloing and jamming! The last track "The Queen Of Spacetime" is a rather spacey affair not unlike Oulu's Deep Space Destructors. All in all, this is absolutely the best release by The Fërtility Cült so far and comes warmly recommended.