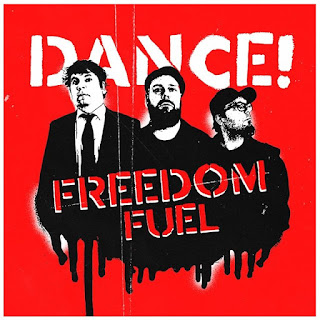 Dance! is the second album by Finnish rock band Freedom Fuel. The debut album Happy People was released in 2016 on Uhka-Tuotanto. They are from Helsinki and I just call them rock band because it's hard to pigeonhole them into any strict category. Freedom Fuel has elements of 90's Finnish/foreign pop/rock/grunge bands like Sub Urban Tribe, Don Huonot or Porno for Pyros including some great melodies. Both of the albums are produced by Jukka Puurula, ex-Don Huonot, who also sings backing vocals on this one so no wonder... On the other hand, they often have a rather hard rocking sound and for example the fast "Planet Away" is stoner rock in the vein of Queens of the Stone Age.

The psych heads also get their moments, although they are rare. The opener "Dancing" has a spacey middle part and some cool jamming in the 70s style, great! You can hear some 70s hard and prog rock influences every now and then (Led Zeppelin, Rush, Black Sabbath, even Yes for example), but the great production is still rather modern sounding. Another bit special track is "Suspension of Disbelief", dark and experimental with no drums or guitar. The use of effects on the CD especially on bass is innovative and really mekas a difference. There are also some synthesizer, accordion and piano to widen the aural spectrum. The album is finished with the pretty piano ballad "Catch Phrase for Believers" to give the album even more variation and depth. Maybe Freedom Fuel could be descibed as a hybrid of mainstream pop/rock and a little more adventurous, experimental stuff. They do know how to write interesting songs, have ear for nice melodies and play really well, that's for sure. If I listened to mainstream radio this is what I would like to hear. Check them out!