Us and Them — ...And I Observed the Blue Sky 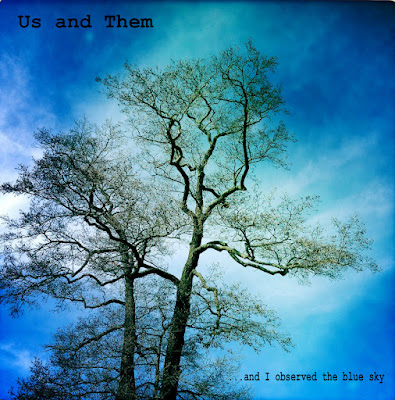 Wonderful news: another great folk rock album by Swedish husband-and-wife duo Us and Them! This is the third full-lenght album by them but there are also several singles and EP's and one 10" on various labels like Fruits de Mer (just try to locate a copy of their cover 7" of soundtrack music from The Wickerman called Summerisle, It's amazing!). Us and Them really can make soulful, soft, touching and mesmerising music and the new album is no exception.

There are 11 new tracks on the 41-minute CD, all written, arranged and produced by the duo. A couple of songs have been released before as digitall singles. They sing and play everything except some keyboards on "Where Wonder Comes From", "Evening Song" and "In Between Times" that are by Per Lindblom. The beautiful melodies are leading the main role like usual, and the vocals of Britt really touch your soul. Most of the stuff is pretty melancholic, but there are also some more uplifting songs like "Looks Like It's Clearing Up" and "In Bube" that also have drums. Also the somehow ancient sounding "A Blessing of a Curse", one of my favourites, and the pretty track "August Evenings" have percussion. The music is very acoustic in nature with a strong emphasis on beautifully and skillfully played acoustic guitars. The title track is more piano-driven, though. There are some subtle psychedelic elements from now and then but not too much as well as some baroque pop vibes. There's also some strings, Fender Rhodes and vibes sounds, for example. The production is crystal clear and superb, so this is an amazing and very enjoyable album in all aspects. Warmly recommended for chilly Autumn evenings sitting by your fire place.