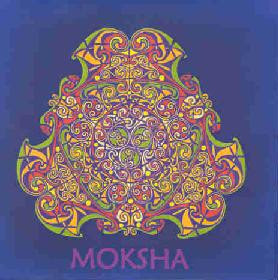 So, why would anybody review a twenty-ear-old limited CD-R reissue of a very rare tape release from the late 80s, one might ask? Well, I'll give you a few reasons. Moksha was an electronic, psychedelic and spacey music project featuring English synthesizer and keyboard player Seaweed before he joined Ozric Tentacles or even the fierce psychedelic freak-out band Thunderdogs. I was lucky to see Thunderdogs when they played with a freak-circus and became a fan immediately, the Ozrics of course have been one of my favourite bands since the early 90s. Not even many of the Ozric Tentacles fans know anhything about Moksha, though, and I feel it's time to change that since this is really good stuff! I just received this double CD-R from Seaweed's partner Claudia (thanks a lot!). It was apparently released in 2002 in a limited edition of just 100 copies, but according to Discogs there was alsa a re-issue (with catalogue number MOK001A). There is very little information about the band or recordings, but the players are Seaweed (Kork Poly 800/Roland JX8P, Korg MS20, EMS Synthi AKS and Roland TR707) and Quiller (Roland D50 and Roland SH101) as well as Gabi (ambient flute). The recordings were made direct to stereo with no overdubs, accoring to a rumour at a London flat of Joie Hinton.

Okay, so how does it sound? There are 13 instrumental tracks heavily influnced by Tangerine Dream and Tim Blake, also the more electronic side of Gong I suppose. I really like the spacey vibe of the album and some of the excellent playing reminds me of Seaweed's later work in the Ozrics as well. Most of the music is pretty ambient and chilled-out in nature, but there are also some faster, more energetic pieces like "Mushroom House". The drum machines are not too prominent, the sequencers and synthesizer sounds are always playing the main role. The sound quality is surprisingly good for an over 30-year-old home/rehearsal space recordings, no problem there. This is very hypnotic, spacey and psychedelic stuff and deserves to be heard by a bigger audience, I think. Maybe is is time for a remastered 2LP version? I would definitely buy it! Very cool stuff. Not sure how to obtain a copy of this CD-R, since Seaweed nor Moksha seem to have any kind of website, so good luck.