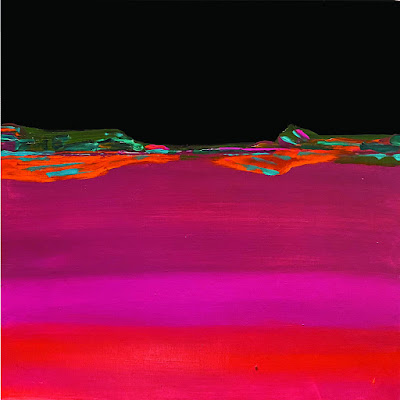 Phospherus is the fourth album by Gregory Curvey's (Detroit, Michigan) acoustic, psychedelic progressive rock project Custard Flux. I got to know him around 15 years ago when he started to send the The Luck of Eden Hall albums for review. I just loved them, and still do! Nothing has been heard of The Luck of Eden Hall for five years, that's when the split album with Red Sun was released on VE Recordings in Italy, but I'm happy Curvey is still making music. He has also performed and recorded with the Welsh space rockers Sendelica, among others. I'm also proud to say he has recorded some excellent guitar etc. tracks for my own Astral Magic project too!

Anyway, let's consentrate on Custard Flux now... It's been two years since the previous album Oxygen was released (read my review here) and besides driving his Harley Davidson and doing beautiful renovation work etc. Gregory has also written, recorded and mixed another killer set of new songs. The main idea still is to use mainly acoustic instruments (piano, hapsichord, harmonium, guitars, autoharp, drum kit, percussion) and vocals to make progressive rock music. Electric guitar is only being used for some of the solos. Like before, we have some guest musicians: Vito Greco on guitars and Portuguese guitar, Timothy Prettyman on double bass, Mars Williams on saxophones and another keen Astral Magic collaborator Jay Tausig on flute and backing vocals. Great! Especially the saxophones and Portuguese styled guitar give the album some new angles.

The 80-minute opus has 12 tracks on it. Some are around 10 minutes, some less than 5, but all are excellent. I love the way Curvey is able to use catchy choruses, weird scales and chords, very progressive rhythms, eerie atmospheres and psychedelic vibes and often within just one song! He is just such a talented multi-instrumentalist that I'm left in awe. So, usually you would think that using mostly acoustic instruments would lead to making a more folk oriented album, but this is definitely not the case with Custard Flux, although there are bits of that too in the mix. There is usually a lot of stuff going on in one track, some of it also pretty hectic, but luckily there is also time to chill out and relax. It is pretty hard to think of any other bands or artists that would sound like this, but some elements remind me of The Beatles, King Crimson and some others. There must also also be some more modern influences I can't really point out. This is very unique, interesting and great sounding music, anyway, and warmly recommended for all the adventurous listeners out there! The CD and limited edition (250 copies) LP will both be available iat the end of December, but you can pre-order right away. Just do it!