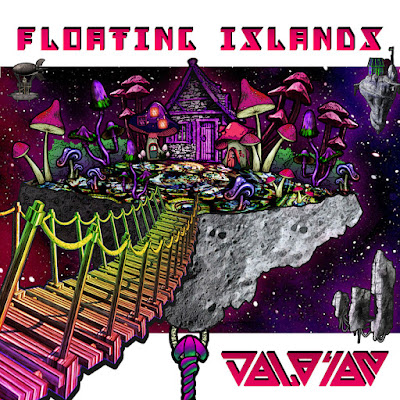 Jalayan is a new electronic based instrumental space rock band from Italy. All the music is written by band leader, synth/keyboard player and programmer Alessio Malatesta, who also recorded, mixed and mastered the album. Other members are Vincenzo Calvano on electric and acoustic guitars, Matteo Prina on electric bass and Martino Malacrida on drums. This seems to be the band's second album. When I put the record on I'm instantly reminded of Ozric Tentacles, and they must have been a huge influence. It's not a pure copy-cat stuff, though, no worries. The sound is a bit different, but the music is very energetic and/or atmospheric, progressive and extremely well played for sure. These guys are very good professional musicians, no doubt about that! Other bands that come to mind are for example Finnish group Hidria Spacefolk, who also have enjoyed their share of the Ozrics of course.

There are eight tracks on the album that was released on CD by the Greek Sound Effect Records a bit earlier and now on two limited edition vinyl versions on Adansonia Records in Germany. All the tracks are from 5 to 7 minute in length. I really enjoy the whole album, so I really can't name any favourites! I love the pulsating, hypnotic sequencers and the soaring, superb guitar solos, as well as the ultra tight and groovy rhythm section. There are also some bit jazzy fusion elements as well as Ethnic vibes, but no Ethnic, acoustic instruments like on some of the Ozrics albums. Things get pretty trancey at times, I'd call this instrumental, psychedelic and progressive electronic space rock. The sound is crystal clear and polished. You can get the LP on clear splatter multicolor vinyl limited to 100 copies or the black one limited to 200 copies, both hand-numbered. A must have for fans of progressive electronic space rock with emphasis on programmed synthesizers!