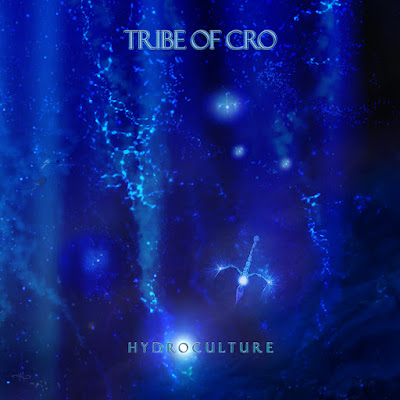 Tribe of Cro was one of the best instrumental, jam-based psychedelic space rock bands in the 90s. They were formed in Belgium with also some British members, including ex-Mandragora and future Hawkwind bassist/guitarist Nial Hone on guitar. The band released three great albums in the 90s, Potlatch LP on the German label Mushroom Runner Records in 1996, also in 96 a CD Sporadic Spiro-Gyra on Hawkwind's Emergency Broadcast System and another CD Hydroculture on their own U.F. Cro Records in 1998. The band used to support Hawkwind during these times and also played for example at the at the 2003 Hawkfest. I did not hear from them for a few years but in 2007 and 2008 a couple of digital releases were appeared out of the blue. Then, after another hiatus of many years, they now have a brand-new 24-minute recording "Force Orbit" on their Bandcamp site. So it seems they are active again which, I think, is great!

I remember in the mid to late 90s how much it sucked when my favourite bands started to release their new albums only on CD. I was a total vinyl freak back then, but also bought the CDs when I had to. Still do, if that is the only option. I'm so happy that some of those psychedelic masterpieces from decades ago are now being released on LP as they should have been in the first place! This is the right format for sure. Hydroculture is composed of 11 tracks that are all instrumental apart from some sampled, manipulated words every now and then. The band has a pretty original style, they don't sound like Hawkwind or anybody else, for that matter. This album has long, rather slow space jams, ultra-psychedelic experimental pieces and also some more rocking stuff for a great, trippy balance. The darkest, most psychedelic passages might be too much for some, but the psych heads will enjoy the whole trip, I'm sure. The new vinyl master by DJM sounds incredible so this is a must-have for all the lovers of freaky, spacey, mostly improvisation-based psych rock. I hope that the band will release some new stuff on vinyl as well soon!