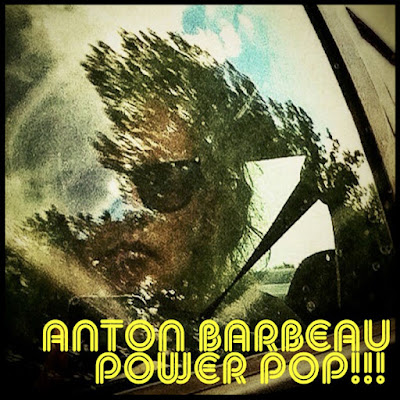 A double dose of Ant in your face! My readers know I've been a follower of this quirky American indie psych rocker Anton Barbeau for years and years, although I don't have all his albums. Power Pop!!! was released this Spring but I just received it with his forthcoming CD Stranger. I'll just let Anton tell us what this first one is all about. “The concept is, early ABBA gets hipped to Krautrock, disavowing their Schlager roots. Drugs happen. Their tight, super-pop sound merged with the kosmische vibe catches the ear of young David Bowie who offers to produce their next record. They convince him to co-write and sing on the record, and the rest is alternate-history,”. Well said, since that's pretty much how this odd but wonderful album sounds and feels like. There are 19 tracks varying in lenght from 6 second (!) to 4:39. The lyrics are mostly very hilarious and off the wall, and so are some of the arrangements and production. Somehow it all still sounds great! Ant always has had a sense for good melodies. There is a strong 80's pop vibe going on, especially on the synth department. And there are a lot of synthesizers on the album! There also some more or less known guests on the album. One of the highlights is "Julian Cope", honouring one of Anton's heroes. I bet this must be one of Anton's weirdest but at the same time best albums! Check it out and see what it does to you.

The 41-minute, 14-track Stranger is a perfect continuation to Power Pop. The guest list is rather long, this time we also have for example Ant's old pal, the ex-Hawkwind and The Bevis Frond bassist Adrian Shaw  as well as Gregory Curvey both playing on "Cellar Bar". Must be about the yearly Fruits de Mer Festival hold in Wales... Despite the tittle, the music is not as weird as on Power Pop!!! but the strong 80's synth pop vibe continues on some tracks. And I like it! There is even some vocoder (on "Ant Lion"), so you know what you'll get. There is also a more rocking, heavier element in there like on "Dollis Hill Butchers" and "ICU". And yes, on the marvellous "Quick to the Basement", Jesus's coming... "Supercube City" is perhaps one of my faves, very groovy and psychedelic lyrics too... There are a couple of Lennonesque ballads and shorter experiments for good measure. It's hard to decide which one of the albums is better, let's just say get them both! Stranger won't be released until December the 9th, though, and you can only listen to one track at the moment. The CD comes in a thin cardboard cover but that's cool.

Oh, I almost forgot: you can also hear Anton play guitar on my latest Astral Magic vinyl LP Magical Kingdom, and he will be featured on a couple of tracks on my future album (Sacred Mysteries).