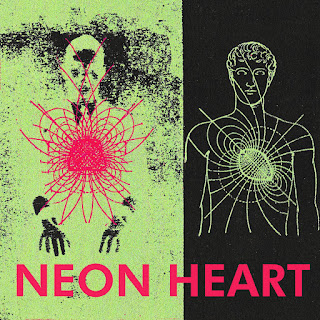 Neon Heart from Stockholm, Sweden, are a band rather hard to label into one genre. Or two genres, for that matter. They are a quartet formed by Magnus Nordén - drums, Johnny Karlsson Kern – bass, vocals, Björn Wallgren - guitar, Petter Kärnekull - electronic viola and Daniel Borgegård Älgå - saxophone. Their music is mostly based on improvisation I guess, and it is definitely sort of experimental and psychedelic. It is rock with bass, drums and guitar, but the use of sax and electronic viola add lots of jazzy elements as well. I listened to their digital EP's this Spring and they were part of my great soundtrack to a lockdown. Now they also have their debut full-length out featuring a couple of older tracks and totally new material.


The album kicks off with the almost ten-minute slow instrumental "Hashima". The sound quality is excellent and the vibe pretty hazy and druggy. Sort of dark trip hop done in an experimental rock way with jazz vibes. "Det händer ingenting" also has vocals in Swedish and it's a rather weird piece on improvisation that starts to rock out more later on. I'm reminded of some of the industrial/post-punk bands of the late 70s/early 80s I think. "Dagarna försvann" is even stranger stuff in similar vein. The two older tracks from 2018 are next. "Till dig ännu en gång" is a bit groovier piece with a cool swing, maybe my favourite. There are some psychedelic parts later on...  "Tupolev in the Air" is nice instrumental jam with more changes and lots of stuff going on. Interesting! "Dagar försinner" is the shortest piece at 3:19 and it again has that cool, trip hop like jazzy vibe. Very nice! The first pressing of the vinyl version is limited to just 100 copies so if you got interested please act fast!