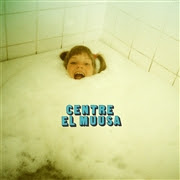 Centre el Muusa is new Estonian instrumental psych/krautrock band with lots of different influences (jazz too) and their debut album is now out on Sulatron Records on CD and soon on vinyl too. The quartet was formed in 2015 as Centre Electronique Muusa which was later shortened. I don't think I've heard of these guys before but at least some of them seem to be very prolific in music in other bands and projects as well. The whole album has a sort of lo-fi esthetic going on but in pleasant, positive way and the musicianship is top-notch.

There are six tracks on the album. The groovy opener is called "Turkeyfish" and it has a cool surf/garage psych vibe to it. Almost ten minutes are suddenly gone in a hypnotic haze, lovely! Amazing electric piano playing in this one and later on as well. "Glitter Bo" is a mellow, smokey and more atmospheric piece that I also really enjoy. Things get heavier later on, though... On "Ain't Got Enough Mojo" the group gets spacier and more psychedelic and I love it... The whole track is based on one hypnotic riff. "Burning Lawa" is a slow but noisy blues number. The eight-minute "Mia" is a peaceful, atmospheric track based on repetition and different elements added one after the other on top of the basic background. Great! "Szolnok" ends the album in a sort of rocking Sundial way although the sound is very different. It also gets a little more progressive. The album sounds a bit like it was recorded in a small, moldy cellar with two mics into a four-track recorder but I've grown to appreciate the authentic feel it  gives you. Check it out!