Electric Moon ‎– You Can See The Sound Of... Extended Version 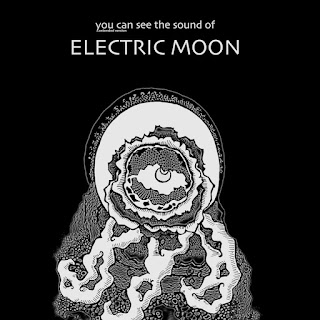 You Can See The Sound Of... was the first and so far only 10" release by our German psych-head friends the Electric Moon. It was released in 2013 in a limited edition of 500 copies and only sold at gigs making it one of the hardest E. M. releases to get. The original EP included three great tracks and now they have added three more from the same sessions to make it a full album! These three tracks have not appeared anywhere before and all the tracks are now put out on CD for the first time.

The original EP can be found on side A of the LP version. First we've got the excellent, hypnotic and hard rocking "The Inner Part". I think this is one of their best tracks at the "under ten minutes" gategory and proper space rock! The even shorter (4:20...) "Your Own Truth" is a rather special Electic Moon SONG since it also has some lovely vocals by the bass player Lulu. Also the rhythm is a bit unusual for the band. Wonderful and very psychedelic! "No Escape From Now" is the long space jam of the original 10" and definitely gets you "out there"... Wow! Also this one has some voice by Lulu adding the mind-blowing effect of the track. Unfortunately due to hard drive crash (when do hippies learn to make multiple copies of their important files?) the rest of the tracks from these sessions only have survived as raw mixes, so the sound is a little more modest but still very good. "Windhovers" is a slower, melancholic track that I really like. It rocks more towards the end! "The Great Exploration of Nothing" has some cool synth and organ by Dave and an amazing, sort of dark vibe. Excellent!  "Mushroom Cloud no.4" is again a longer, over 11-minute space exploration starting off in a very tranquil way. I'm really happy to hear these previously unreleased tracks that really make this LP/CD worth buying even if you (like me) have the original 10" already. I love this band!