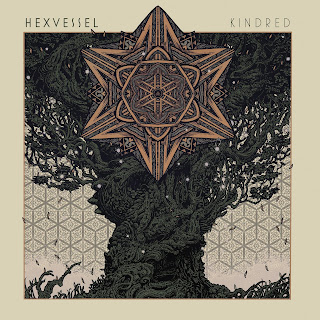 Okay, I've been so busy making music of my own that this album is already sold-out by the time I get to review it... Well, here we go anyway, I'm sure reprints are on their way pretty soon! A new album by Finnish occult forest psych folk/rock masters is always a big happening in my world. Last year's Old Tree was definitely one of the best releases in 2019 and now it's time for Kindred. The band have returned to Svart Records after a few years flirt with foreign labels and it seems to me they are back home now. The new album is perhaps a little less psychedelic than some of the previous ones but no less atmospheric, brilliant, touching or esoteric.

The seven-minute "Billion Year Old Being" starts off the album with its creepy, melancholic ancient vibe. Amazing and rather dark and heavy as well! There are some prog rock elements in there too for good measure. "Demian" is next, pretty weird and intense stuff. "Fire of The Mind" is more folk oriented and very beautiful and the slow and hazy "Bog Bodies" has a Twin Peaks like vibe. "Sic Luceat Lux" is a short, strange experimental forest folk instrumental. "Phaedra" is a dark and creepy, slow piece that gets under you skin and inside your soul, phew. After the sunnier, little  acoustic piece "Family" comes the emotional, sort of main song "Kindred Moon" and I totally love it. There's even some piano in it. "Magical & Damned" is another one of my favourites, very touching indeed. The album is finished with the brilliantly pretty "Joy of Sacrifice", mostly in acoustic mode again. I don't know exactly where the band gets these otherwordly moods from but it sure must be a special place... This is anothet masterpiece, what else can I say. Get is as soon as possible.