Vibravoid - Vibrations from the Cosmic Void 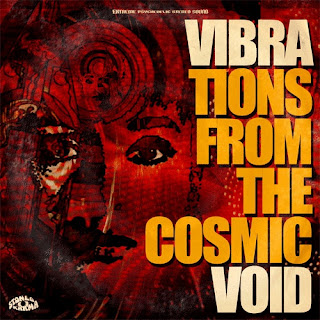 Germany's number one psychedelic acid rock band keeps on pushing groovy, cosmic and mind-blowing sounds to the people. My brain has not even back to normal after Mushroom Mantras released last November. Now it's time to get TOTALLY spaced-out and even the catchy choruses and pop elements the band is famous for are lost in the trippy sea of  sonic mayhem.

This album sort of continues from the earliest Vibravoid recordings with "Vibrations From The Cosmic Void Part II". It's a great, short psych tune to get you tuned on the Vibravoid frequencies. Another shorter (well, five minutes or so) and up-beat track "The Modular System" follows and keeps a hypnotic, krautrock styled tension on for its whole duration. This instrumental turns into "Melodies Of The Stars" that also has a steady, groovy beat going on with tons of hallucinatory effects and monotonic vocals, this time in German which sounds very cool. Achim Reichel fans take notice! In the middle the beat fades out for a weird side-trip into the cosmos but it makes a return after a while. The end is chill-out stuff. On side B the band goes into a long, strange and relaxed trip with 20-minute dream sequence "The Cosmic Playground". This is very experimental stuff with sitar and Mellotron sounds and Lord Shiva only knows what else. As you might guess, the short ending tune "Frequencies Of The Cosmos" isn't one inch more "normal"... Wow, another killer album by one of my best-loved bands for sure! The CD version of Vibrations from the Cosmic Void has two bonus tracks: "Mirrorspace" (19:56) and "Milchstrasse 14, Cologne" (6:50) that stay in the experimental, instrumental ambient/spaced-out-of-your-mind state. If you were wise enough to buy the limited pre-order LP version you'll also get a bonus LP from Vibravoid's Rheinkraut Festival. This is only half of the gig that will be released as a 2CD later this year.