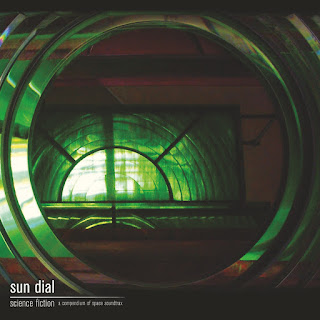 Sun Dial, one of the most important and influential post-psychedelia bands from the U.K., has been among my favourites since the early 90s. Their debut album Other Way Out released in 1990 is a real corner stone in the history of psychedelic rock combining 60s psych with 90s style and the band have continued to pour out mind-blowing stuff ever since. New albums have been a few years apart during the new Millennia, but you can always count on Sun Dial to deliver the goods. Mind Control released in 2012 was a true masterpiece of hypnotic space/kraut/psych rock and on the latest album Made in the Machine (2016) the band had developed a more electronic but just as great and hallucinogenic brew of psychedelic sounds and beats. On Science Fiction the band have put together their Sci-fi / space oriented soundtrack music from the last 20 years and the end result is amazing. I knew that Gary Ramon & co. had done some film and television soundtrack work but I had never heard any of it, at least not knowingly. Here we finally have 12 previously unreleased tracks of atmospheric, instrumental and rather electronic but still rock oriented music of that stuff!

"Hangar 13" operates as a launch-pad to the space journey. A slow, droney, repetitive and spacey haze fills your mind. I love those Mellotron sounds. "White Stone" is a bit groovier piece and "Mind Machine" is a rather electronic juggernaut. "Saturn Return" has some early 70s krautrock as well as space disco vibes, cool. On "Space Travel" the journey into stars continues in a very nice way. "Alien X" is a beautiful space ballad and "Rise of the Robots" is a pure electronic piece. "Airlock" is closer to traditional psychedelia with sitar and percussion but still very spacey as well. "Aftershock" is another killer electronic rock number that also has some Air vibe I think. "Ghost Ship" is a bit darker and brings to mind Depeche Mode in a way. "Infra Red" is a groovy, funky and spaced-out piece and the album is finished with the more ambient, magnificent and gorgeous  "Starwatchers" that could almost be a Hawkwind out-take from Church of Hawkwind. Amazing! The LP version is limited to 750 copies and the CD limited to 500 also has the long version (15:29) of "Hangar 13" as a bonus track. All Sun Dial fans naturally NEED this album and everyone into spacey, psychedelic soundtrack music should also try it out. Marvellous!