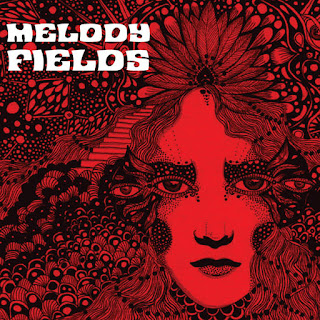 Melody Fields is a new Swedish psych rock band who released this debut album of theirs earlier this year. The magnificent, mystical opener "Morning Sun" was already released digitally last Autumn and I was immediately in love. This Gothenburg-based group was formed by Thomas Widholm, Ramo Spatalovic and David Henriksson in 2015. Nowadays they have five members. You can hear some Oriental vibes in their wonderful, harmonic, sort of 60s and 90s styled, guitar-dominated music.

After "Morning Sun" we get the sunny and airy "Liberty", another amazing, melodic piece. I really enjoy the full guitar sounds and harmony vocals of Melody Fields. "Run" is a bit heavier and brings to mind The Black Angels, Golden Void and Assemble Head In Sunburst Sound a bit, but there's an obvious The Byrds vibe there as well. "Rain Man" is a very nice, jangly psych pop piece with echoes of The Soundtrack of Our Lives in addition to the previously named bands. Cool! "Fire" is a dreamy pop psych piece that could be a Verve out-take from the 90s. Great guitar lines, once again. The organ is also great. The longest track on the album is the 10-minute tranquil and soulful "Trädgränsen" that ends the limited vinyl version in a great way. Later on it has some loud & wild guitar solo freak-outs. The CD (on Sound Effect Records) and digital version also has "Morning Sun Revisited" that's a sort of acoustic, even more mystical and Oriental version of the opener. Amazing! This album will be a perfect soundtrack to your Summer dreaming and fun, so go and get it!