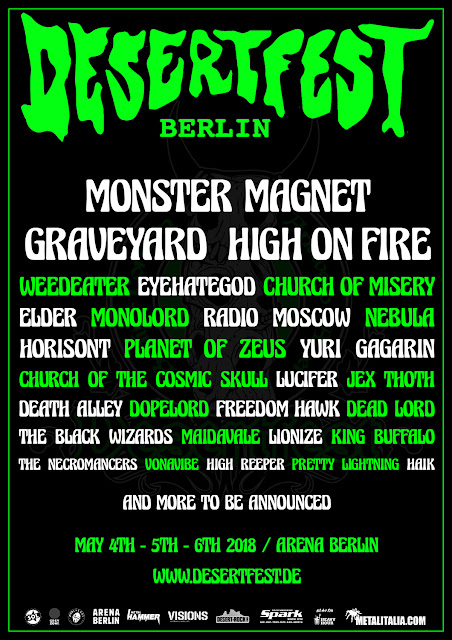 It's been a while since I have been at bigger festivals abroad (DJ:ing at Roadburn 2014, to be exact), and even now this happened almost accidentally. Just one month before the festival I received a last-call email from Desertfest Berlin saying that they were closing their press accreditations soon. I filled in the form without thinking much, and was soon accredited. Okay, flights, hotel, some money and I was ready to go! I even had quite a lot of friends going, excellent. I had only heard good things about this festival before. This year the festival had moved to a new place: Arena on the other side of the river than the previous area. Arena is a huge, old buss terminal that can hold up to 9 500 people. All the bands were playing on two stages that were placed side by side. This meant that you could see all the bands without any overlaps. It also had a few disadvantages but I'll get back to that later.

This festival certainly focuses on heavy stoner/desert/fuzz/occult/hard rock & doom metal bands but there were also a few more psych or space rock bands on the lineup. Monster Magnet is an old fave of mine and since they were not going to play in Finland on this tour I was excited to see them. The band I was mostly looking forward to see was Swedish psychedelic space rock band Yuri Gagarin since I've really been enjoying their studio output and had not seen them live before. Most of the bands were at least somehow familiar to me but there were also some that I had never even heard of before.

It felt like Summer in Berlin for the whole four days I spent there. On Friday I met some friends at a park before the festival to get in the mood and this was to be the norm for the whole festival. The bands started rather early, so I sadly missed a few first ones every day. What I really feel sad about is missing Swedish female psych rock band MaidaVale on Saturday, since I really wanted to see them after just checking them out before the festival. Ordering a hamburger in town just before and not remembering the right starting time were my mistakes and I only made it there when they had just finished... Oh well, hopefully some other time.

I was most active on Friday arriving to see half of the second band Pretty Lightning. They were good and a bit different from the main emphasis of the festival (see my video below):

I of course really enjoyed all the rest of the bands and it was first time to see Nebula and Death Alley. Because of the huge size of the venue the sound got a bit muddy and echoed when you were at the back but getting closer to the bands helped a lot. Monolord were great as always, Monster Magnet played quite a lot of songs from the new album that I have not really got into so much yet but Dave was on fire anyway. I even had some stamina left to check out the cool dj who played until 3 in the morning. What a great night! I must also say that liked the outdoor area with bars, food-stalls, dj's, karaoke etc. Getting and paying with the "desert dollars" was pain in the ass for everybody, though.

After sadly missing MaidaVale on Saturday I watched most of the Horizon show before heading back to the sunny river bank outdoor area. Cool 70s styled hard rock band! King Buffalo was a very nice new find for me and I highly enjoyed Elder, Lucifer and Graveyard as well. Luckily I was still awake when Yuri Gagagarin played the last slot of Saturday after midnight. I was totally mind-blown and couldn't even shoot video anymore... We definitely need to get these guys to play in Finland!

On Sunday I was pretty wasted and tired although I still had a lot of fun... No videos were shot that day, but the highlights were Church of the Cosmic Skull (again, a rather different act than the rest), Jex Thoth, Eyehategod, Radio Moscow and the very energetic High on Fire.

All in all, Desertfest Berlin 2018 was an excellent festival and superb experience and I'm sure I will return! 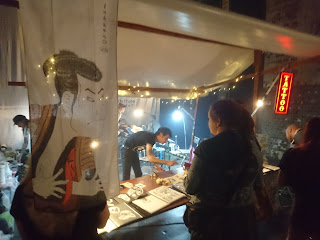 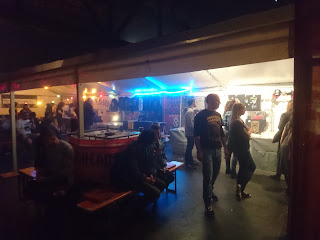 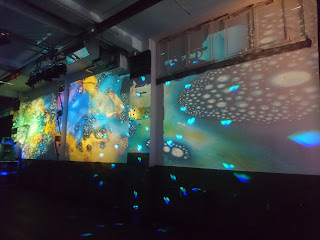 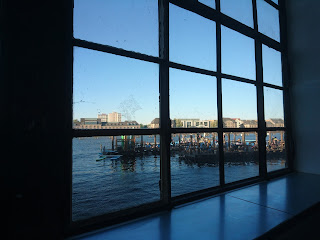 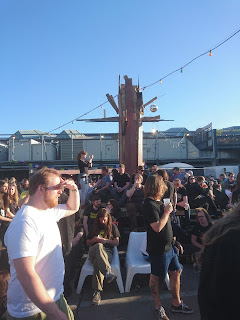 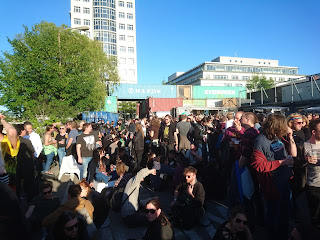 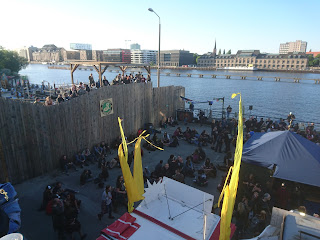 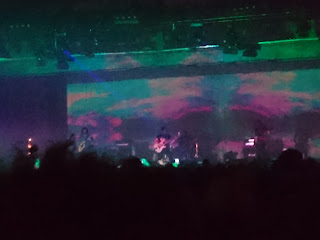 There was very little time for sightseeing this time but we did go to a few record stores and flee markets etc. The best second hand record store we popped in was Waxart on Gärtnerstr. 23. They had optic art walls and even a small bar in there! See the pics below. 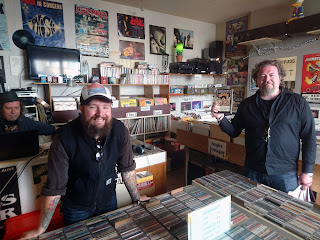 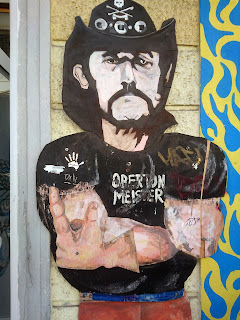 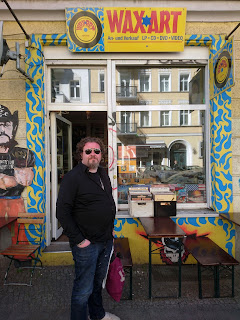 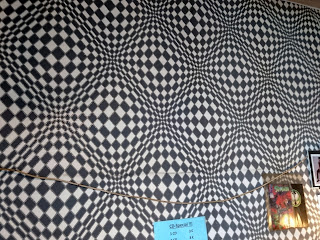 Next a few pics taken at the parks & restaurants... 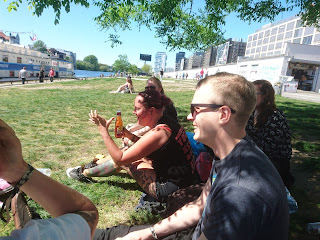 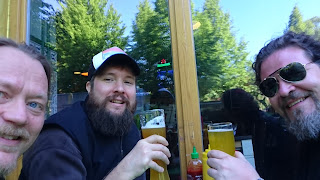 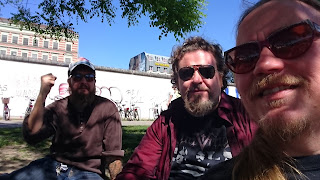 Just before going to the airport and back to Finland our Desertfest Berlin pioneers showed us around the old festival area where the first six or so editions took place. The next pics are from there, looking pretty groovy...

Thank you Berlin, Desertfest & the best of friends, I love you all! 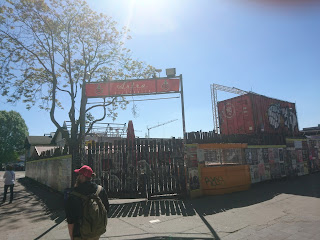 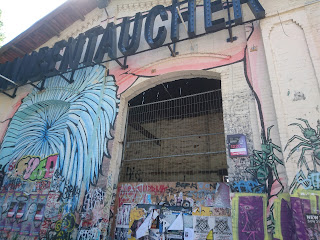 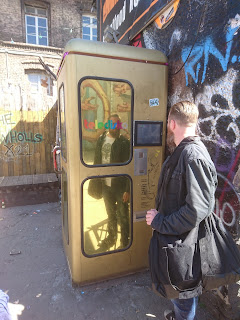 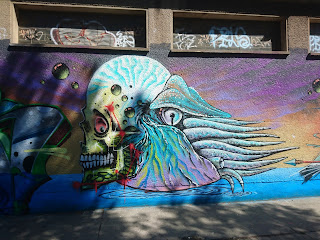 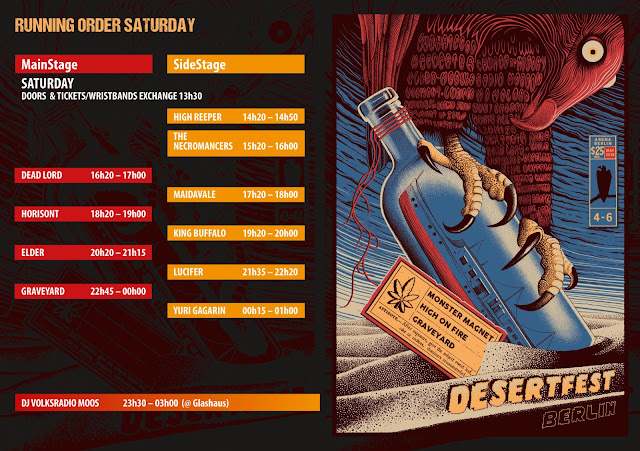 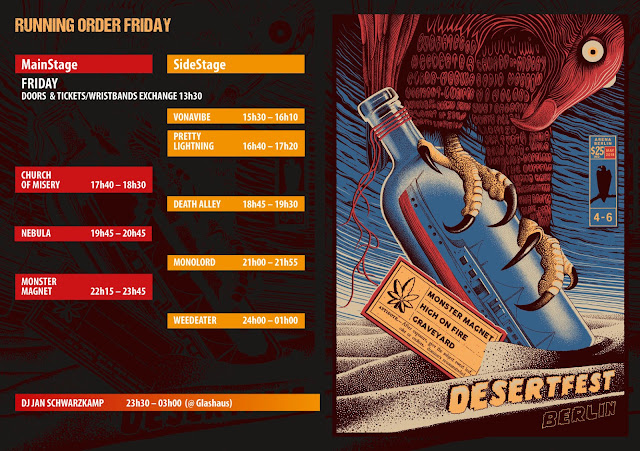 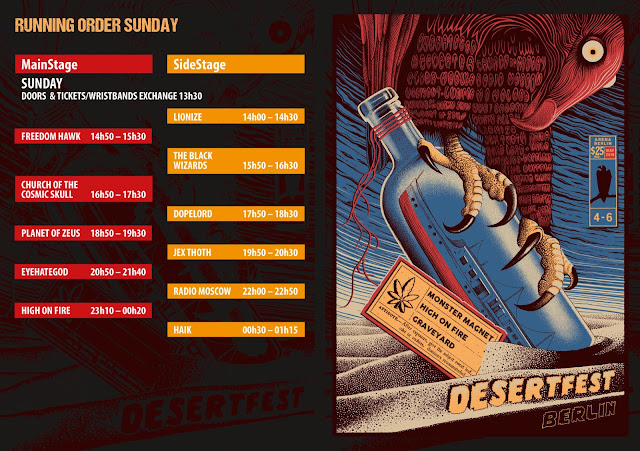