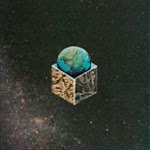 The latest LP by these superb psychedelic space cadets from Scotland is this beautiful marbled piece of vinyl that includes just one 40-minute track divided in two parts. The Cosmic Dead has been one of my favourite modern psychedelic space rock bands since they sent me their first, self-titled album on CD-R in 2011. After that I have bought all the tape and vinyl releases they have put out and also seen the band live twice, first at Roadburn Festival and then at Liverpool Psych Fest. They have the ability to resurrect the Space Ritual era Hawkwind blanga but they can also do much more. This new album was recorded in Scotland in August 2013 and released in March 2014 by German(/Italian) label Sound of Cobra.

“Easterfaust Part I” starts off in a very mesmerizing, slow and dreamy manner. There is also some distant, effected human voice to be heard. This band really trusts on repetition, but they still make enough changes to sound interesting. After a very spacey, experimental ambient part the track starts to rock in space/kraut rock vein with full energy before the nine-minute marker. Think of early 70’s Hawkwind jams like “You Shouldn’t Do That”. Things will only get heavier, trippier and more spaced out… This will blow your mind to pieces! Part II continues the in-your-face space rocking and there’s also lots of analogue space sounds going all over the place. This is my favourite kind of music I’ll tell you, wild, hypnotic, psychedelic, a bit crazy and highly psychoactive. After rocking out for 16 minutes the track cools down into ethereal, blissful floating that goes on for a couple of more minutes before the final burst. Amazing! Just get this album and everything else this spacey bunch have put out, you won’t regret it. The vinyl is already sold-out at the source but you can still get a copy from some mail-order companies and the CD version on Paradigms Records is just out. The Cosmic Dead are also playing live around Europe quite a lot so go and see them too!