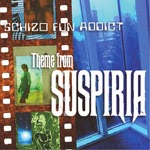 Schitzo Fun Addict from the US was the first band to ever release music on Fruits de Mer back in 2008, and their single limited to just 300 copies including covers of “Them One” (Van der Graaf Generator) and “Ogden's Nut Gone Flake” (The Small Faces) is now really collectible. After six years it’s time for another amazing 7”! This time they are focused on movie soundtracks with a twist. On the side A we’ve got a totally marvelous, psychedelic and scary version of “Theme from ‘Suspiria’”. This track originally written and recorded by Italian prog band Goblin for the classic 70s horror movie by Dario Argento, is one of my favourite soundtrack pieces ever. It has such an eerie vibe, and Schitzo Fun Addict have added some spacey, mind-blowing analogue synth swooshes to expand the experience, and their version is rather different in other ways too, but still of course includes the spooky but whimsical melody. Great! On the flipside, there is a more positive sounding song called “In the Long Run” that is well familiar among the fans of Russ Meyer since it originally appeared in his 1970 exploitation movie Beyond the Valley of the Dolls. Wonderful, sunny sounds of the ages gone by! I love the female vocals of this band. There’s again a psychedelic twist included but only in a subtle manner. The single will also include an insert and a DVD of a film by the Schitzo Fun Addict’s main man Jet Wintzer so you really get your money’s worth of goods here!