Census of Hallucinations: Coming of the Unicorn 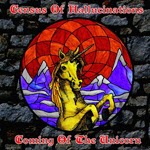 The space/psych/prog/ambient band Census of Hallucination released the album Coming of the Unicorn in November 2013 and this might just be their most cosmic and psychedelic CD since their debut album in 2000! The band has put out several compilations and also re-done some of their old stuff, but this is almost 100% brand-new stuff with a nicely flowing full-album vibe.

The psychedelic and experimental “Something That Affects All People” starts off the album, and then the band goes into pleasant, dub-like mood with “Only Time Will Tell”. The twin-vocals of Tim and Terri~B work very well and there is also some floating solo guitar. “As Within So Without” has a quite electronic, sort of weird vibe, and the next piece “Put the Head On” is a more rocking, mysterious, rather heavy and trippy instrumental that I really enjoy. On the title track the sequencers and synths are playing an important role, but we also get some amazing solo guitar. I’m glad that John Simms (Clear Blue Sky) is also playing guitar and guitar synthesizer on this album! “Stars” is yet another reworking of “My God, It's Full of Stars”, but this is a very different, spacey and rocking version that has more guitar than before and is perhaps the best version there is! The Gong vibes shine through on “Miracle” and that’s totally okay. “Electroid” is a short sound experiment, and then it’s time to trip out with the trance-inducing instrumental “Crystal Spheres of Light” that is perhaps my favourite on the CD. “UFO Over Penrith” is a short, nice ambient piece and “Love You True” a pretty, cosmic ballad. “Existential Vertigo” is another short instrumental interlude and the album is finished with “As Within So Without (Slight Return)” to make sure we don’t end up feeling too normal after the album experience… UFO abduction, anyone? This is an excellent album and I’m so glad the band is definitely going into more spacey and mind-expanding direction. Great!