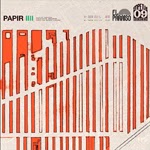 Papir is an instrumental psychedelic/kraut/space rock trio from Copenhagen, Denmark, and I have been a fan since the self-titled debut released in 2010. They have also released one collaborative jam album with Germany’s Electric Moon and one split 7” with their space brothers Øresund Space Collective. I have really enjoyed all their releases, and this brand new album is no exception! They have the ability to create unbelievable atmospheres mainly with just guitar, drums and bass. The couple of latest albums sometimes have similar moods than some post-rock bands, but Papir is far more inventive and interesting than your average trend band and also goes into much more psychedelic areas that really touch your soul. They can also be rather heavy in the progressive stoner rock vein, which is great. And these guys are also excellent musicians! The vinyl version of this new album is limited to 1000 copies and includes three long, new studio tracks with excellent sound quality. There’s a download code included so you can also get the fourth, shorter bonus track (“IIII.IIII”) that didn’t fit on the vinyl.

There are two tracks on side A. “IIII.I” starts off in a pleasant, a bit jazzy style in 5/4 time signature and you can definitely tell what band this is. After some very nice jamming and soloing things get heavier and more intense and there’s also some organ in the mix. Then the track cools down into very mesmerizing and percussive waves of pleasure before the cerebral climax. “IIII.II” begins in a very tranquil mode with some flageolet-notes and it stays very peaceful and ambient for a long time growing very slowly like the best post-rock tracks. Before the four-minute-marker it starts to rock out in kraut rock mode and sounds really excellent! Then we are taken into outer space with some rather fast and energetic but still pleasant and not that heavy stuff that gets more floating and hypnotic in a while. Amazing! The over 20-minute “IIII.III” takes the whole B side of the vinyl and this is a real psychedelic trip with many different turns and moods. At times it’s very groovy and jamming with very fluent playing by the whole band! Their music sounds improvised but if it is then they must be telepaths since there really is no idling that often happens when bands are just jamming. These guys know 100% what they’re doing. This is absolutely the highlight of the album and will blow your mind. “IIII.IIII” is just a soft and relaxing five-minute flight including some organ to sooth your brains after the sonic onslaught of the previous number. Very nice! I really love this band and can’t wait to see them live at Roadburn Festival next month both on their own and together with one of my other musical heroes Electric Moon.