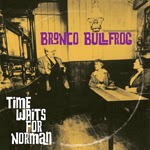 I’ve never before heard of Bronco Bullfrog from the UK, but this trio named after a 60s cult movie have been around from 1996 making wonderful, totally 60s sounding psych pop / freakbeat music. It’s like The Kings and Kaleidoscope (UK) were still active and movies made in black and white, the innocent 60s vibe is so authentic. First we get two originals that totally sound like they were written in ‘67-‘68. “Time Waits for Norman” is a melodic mid-tempo piece with some catchy harmony vocals and danceable beat. There’s also a little bit of phasing to give it a slightly psychy vibe, but this is still rather safe and sound pop stuff and not that freaky. The shorter “Rocking Horse Mender” is even sweeter and more naïve, but it’s such a lovely song that you will have hard time not to fall in love with it. I really liked the picked electric guitar on this one and the melodies are captivating. Then they do a nice cover version of a classic freakbeat song “Listen to the Sky” originally released on a single in 1967 by Sands. Why an earth have I never heard this track before? It should have been on one of the 60s psych compilations I have… Well, it’s a great track anyway, and has a little bit more edge. “Close your eyes and listen to the sky!”. That’s a great advice if you ask me. Go and get this little precious piece of coloured vinyl fast or suffer the insane Ebay prices of tomorrow.