The Chemistry Set - Point Me A Dream 7" 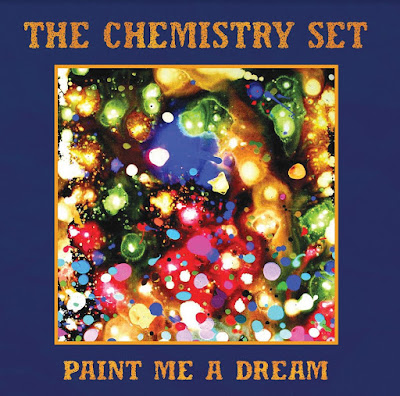 Wow, what a great single by the veteran UK psych pop rockers The Chemistry Set! As usual, I'm a bit late with my review since the 7" was already released a month ago on the American label Hypnotic Bridge Records. I've just been busy and these digital files have the tendency to disapper in the mystical depths of my computer. I'm actually listening to this the first time right now but I'm instantly in love! No wonder, since The Chemistry Set really know how to capture the listener with their psychedelic, melodic and brilliantly produced sounds.

So, what exactly do we have here? "Paint Me A Dream" is a very powerful, melodic and rather energetic psych rock song perfect for a single release. You can hear the band's 60s and 80s inspirations on it but it sounds mostly just like The Chemistry Set. Harmony vocals, Eastern vibes, killer fuzz leads, it has lots of goodies packed in just under four minutes. Perfect! Another winner is the cover choise on the flip side: "The Witch" originally by the early 70s UK acid folk wizard Mark Fry! Not only such a great track as it is, The Set have totally made it their own with a cool intro and freaky end jam, amazing! I could have listened to this much, mush longer than just over five minutes... So what else can I say, another superb single by this great band that I'm a big fan of. People ouside of the US might have difficulties getting a physical copy, I just ordered the last one from Sound Effect Records in Greece, but it is definitely worth hunting down. Well, at least you can get the digital download that comes with a couple of very cool remixes by Astralasian's Swordfish!