Sleeping Pandora - Signs in the Sky 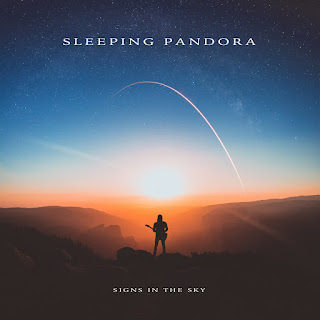 Sleeping Pandora is a solo project from guitarist/producer Mathias Rosmann. He has also played in a space/stoner rock band called Cosmic Fall. Mathias has released several digital/CD releases as Sleeping Pandora and I have included his tracks to a couple of my Astral Visions Mixcloud Shows before. Sleeping Pandora is beautiful, floating and spacey instrumental electronic music with great, melodic and emotional electric guitar work on top. Some of it is rather space/psych rock oriented but mostly I would describe it as electronic ambient post rock/electonica. It's all very well produced and you just get sucked into it.

The new album has six long tracks. The journey begins with the excellent "Raytracing". Lots of delay on the guitar... The electronic beat soon joins in to give a rather modern edge, sort of like some of the Ozrics stuff. I am floating in space, anyway! One of the best pieces on the album. "Mandarine" comes next and is cool chill-out music with a bit of dub vibe. "Floating High" is a more guitar oriented, peaceful and almost 17-minute trip into the night sky, just wonderful. The next piece "Tears" is another emotional, beautiful track. On "The Dome" we get some more spacier ambient stuff and the delay guitar brings to mind Steve Hillage or Manuel Göttsching‎. I love it! The album is finished with "Touching Moon" which again is an ambient, spacey electronic piece with a bit faster beat this time. This one gets more danceable too.Very nice! I really hope this stuff would also see a vinyl release, it sounds so great.