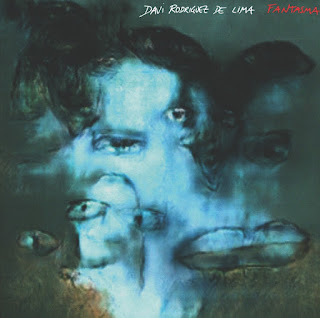 This is a limited (300 copies), vinyl-only release of the first solo album by Davi Rodriguez de Lima. Davi is a musician and recording engineer from Brasil, but he has been living in Germany for years now. Before moving to Europe he has played in bands like Ecos Falsos and The Orange Disaster. Here he sings and plays all the instruments himself apart from the trumpet. I haven't previously heard of him so let's get into it...

There are eight tracks on the album, all in between 3:36 and 5:41 in length. The overal vibe is pretty surreal, noisy and psychedelic and most of the music rocks. There are some blues, garage, alternative, punk rock, experimental, you name it. The opener "Fantasma" starts off with some whispering and field recordings. Then we get some noisy, hypnotic guitar, programmed, sampled drums and vocals. The bass is played with a Moog Synthesizer on the whole album. "Tamed" is closer to stoner rock or heavy psych I guess, groovy stuff with some cool solo guitar work as well. I like it! Then some more field recordings to kick off the fierce and aggressive "Off Track". I'm reminded of The Heads, early Monster Magnet, Fu Manchu and the like. "Eternal Children" is a slower, more shoegazer-influenced, heady track. "Grey Times" starts off with field recordings again and when the music begins an image of a stoner rock version of Lenny Kravitz comes to mind. The trumpet is used in a pretty wild manner. "Neblina Rose" is a more relaxed song sounding a bit like Syd Barrett's solo stuff. It gets rather bluesy later on. One of my favourites is "Banalized" that rocks out in the early Sun Dial style. There is an experimental section in the middle. The album is finished with the more peaceful "Filho", a very nice ending to an interesting album. It took me several rounds to really get into this album but when it hits its rather good indeed. Check it out!