Nukli - There Is Another Way 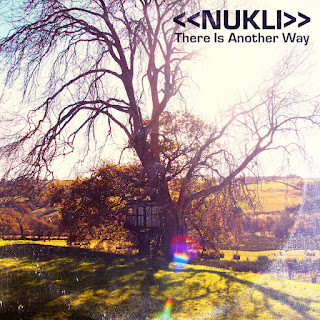 Nukli is one of those British prog/space/psych rock bands that I, like many other psych heads, got to know in the 90s through the excellent Delerium Records and Freak Emporium mail order. They started out in the 80s as Psi Nukli  but soon dropped the Psi part. After a few tape releases and an appearance on the Pick & Mix 2CD compilation their excellent The Time Factory album was released on Delerium in 1997, sadly only on CD. I didn't hear anything from them for years but the band must have activated again and started to play live. Two live CD's were put out by the band in 2013 and 2016, and last year they finally released a new studio album on CD! There Is Another Way was recorded at the legendary Foel Studio in Wales already in 2012 but mixed last year. Now it's time to finally have a Nukli album out on vinyl, since Space Rock Productions is releasing it with a bonus track "Foel Funk" on 2LP in May!

The music of Nukli is perhaps best described as a bit spacey and psychedelic, groovy progressive rock. So the emphasis is on the prog side for sure. The basic trio of bass, drums and guitar is enhanced by vocals, keyboards and synths by the guitar player. Even on the album, for example on the instrumental "Kraanich", when there is more keyboard oriented parts there is no guitar, so the overall sound is rather airy and not too full of stuff and too over-dubbed. You can clearly hear what everybody is playing because of this. The guys are all great musicians and their songs are adventurous and interesting but not too hard to follow or understand. There are some jazzy and funky elements, Gong/Canterbury vibes, free festival/space rock scene stuff, ethnic, acoustic parts, you name it. They have also used some spoken samples. The band often gets most psychedelic during the excellent guitar solos. For example the title track is very trippy as  a whole, though! All in all, this is a very enjoyable experience and it feels so good to hear some new studio stuff by these old progressive space cadets again! The vinyl is limited to just 300 copies so be fast...