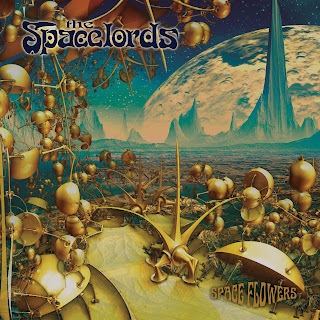 For ten years the German psychedelic space rock trio The Spacelords have been working on their way up the ranks in heavy, spacey and mind-altering instrumental rock music. Space Flowers is their ninth album if you count the split LP with Dhvani and I'm happy to say I've got them all. The band is getting more and more attention with every new record and like the previous LP's this new one (1000 copies on clear yellow or green vinyl) was sold-out from the label on pre-order alone. No worries, though: a repressing is already on the works!

Like before, the three tracks on the album are loooooong! First, the 13:30 long title track blows your minds with hypnotic, mid-tempo space rock blasting. This track also includes some Moog and Hammond by Didi Holzner which sounds great! In the middle things get rather heavy too. Wonderful! "Frau Kuhnkes Kosmos" is a bit faster and more in-your-face stuff, pretty energetic. What really gives me cosmic, aural pleasure is the last, over 24-minute-long track "Cosmic Trip". It's divided into three parts and really takes the listener "somewhere out there"... There's lots of emotion, power, strange inner/outer space vibes, some Oriental influnces, excellent playing & cool experimentation, you name it. Just Wow! The Spacelords have done it again, Space Flowers is already a strong candidate for the top 10 psych rock album list for 2020.