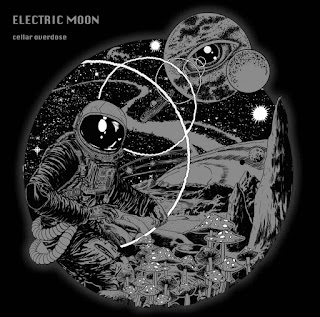 Okay, what we've got here is in fact the second reissue of an Electric Moon gig recorded 27.01.2012 at Darmstadt Kulturkeller, Germany. The gig was first released on a very limited CD-R (Cellar Space Live Overdose - Darmstadt)
in early 2012 and then as part of the 2LP Cellar Space Live Overdose together with two live tracks recorded at KulturKeller, Fulda a few months later. Since both of these releases are of course long-gone collectors items, it was time for a reissue to feed the hunger of the new fans. The band was not really that happy with the quality of the KulturKeller tracks, so only the Darmstadt stuff was reissued. A good choice, since this is the killer stuff.

There are no overdubs, so you get the 100% live experience. The vinyl version has the two longer tracks (same as on the 1st LP of Cellar Space Live Overdose): "The Soul Feeder" and "The Idle Glance", the CD also has the third jam from the original CD-R release called "Lost And Found Souls". This is a bit shorter: "only" 16 minutes! The sound quality is really good for a live recording like this. These jams are some of the most psyched-out by Electric Moon so if you missed the previous releases this is a must have for all the fans. Personally I think that even if you have the gig already on CD-R and 2LP this new version is worth getting for the superb new cover art alone! Both the CD and LP are limited to just 500 copies so I bet they will also sold out soon. Get it and get spaced-out as well!