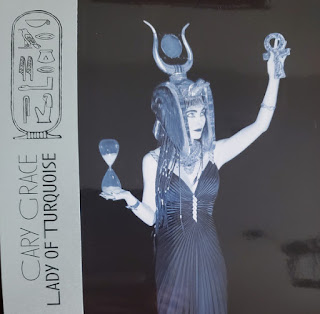 Wow! Isn't this is a great double CD packed with sublime treats aplenty. I bet many of my readers remember the UK-based songwriter, producer, musician, singer and analogue synth maker Cary Grace from her many excellent cover versions on Fruits de Mer label's releases. She has been putting out psychedelic/progressive/space/art/folk rock music on (apparently her own) Door 13 Music since 2004 but I must admit I only had her latest 2016 CD album The Uffculme Variations that I really enjoyed.

There are 13 tracks together on the two CD's. Most of them are rather laid-back and emotional, pure magic.There are also a few groovier ones for good measure. The album starts off with the spacey, hazy and lazy instrumental "Khepera at the Dawn". "Letterbox" is a folk rock oriented song with some cool, heavy fuzz solo guitar and psych effects. Nice! "Without a Trace" is a bautiful, slow and romantic piece with piano and perfect harmony vocals. This reminds me of Kate Bush a bit. "Into Dust" is like a female equivalent of Nick Saloman / The Bevis Frond and I really like this one. "Afterglow" is another killer track with a darker edge this time. The spoken word works really great just like the superb electric guitar and spacey synths. Excellent! "Film Noir" is again more romantic, peaceful and pretty stuff. The first disc is finished with the over 12-minute "Costume Jewellery". Violin and acoustic guitar give this song a sort of ancient, acid folky touch at the beginning. Later on the track grows and gets really trippy, just wait...

The pretty and tranquil "Moonflowers (Fade to Black)" is first on the second disc. The vibe is similar to some of the Crystal Jacqueline songs, very nice. "Sacrifice" has a bit groovier beat going on and some great musicianship all over. If you remember the UK underground band Census of Hallucinations you get the picture. "Memory" is a beaufiful, melancholic ballad and the rocking "Castle of Dreams" the third longest track on the album at 11:20. This could almost be an unreleased Magic Mushroom Band track! Things get more ethereal towards the end. Then it's time for a shorter, experimental ambient synthesizer piece "The Land of Two Fields". The title track "Lady of Turquoise" is saved for the last and it is without a question one of the best songs. A bit more up-beat, trancey, mesmerising and danceable, I'm sure this goes down well live too. Some of the synth work brings to mind Hawkwind circa 76 which is always good in my books. The psychedelic hypnosis goes on for almost 12 minutes and I enjoy the whole ride. An excellent ending to a great, lengthy album that does not get boring for a second. Now all we need is a double vinyl version!