Lucifer Was ‎– Underground And Beyond 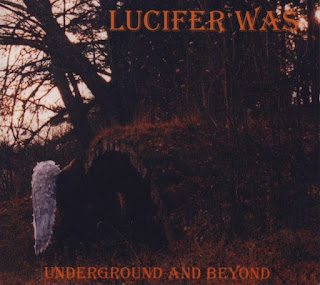 Lucifer Was is a progressive hard rock band from Oslo, Norway. They were first formed in 1970 and played together until 1975 without recording an album. They reformed in 1996, went into a studio and recorded Underground And Beyond in just 18 hours. The album included songs originally written in 1971-72 and was released on picture LP on the Swedish label Record Heaven. After that the band has released six more albums and is still going strong. Underground And Beyond was re-released late last year on the Spanish Sommor label, this time on standard black and limited clear vinyl (as well as on CD).

The band has been descibed as a proto-metal band and a mix in between Black Sabbath,  Jethro Tull and Atomic Rooster. I'd say these descibtions are pretty solid since some of the guitar riffs are rather heavy and the band has lots of flute and progressive influences. There are eleven songs in total and all are at least rather interesting. I prefer the heavy, Black Sabbath-like tracks (like "Teddy's Sorrow", "Out of the Blue" ets.) but the most of the more progressive oriented are great too. I like the fact that some of the album also brings to mind early Pentagram and there are some psychedelic touches in there as well. The playing and vocals are great and I also like the production. Get this now if you didn't do that on the first time!