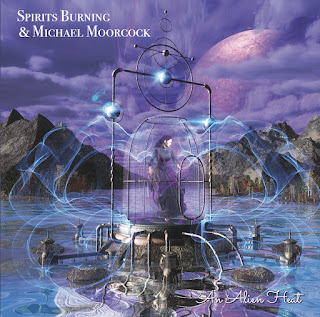 An Alien Heat is the 14th CD by international collective Spirits Burning established 1986 in San Francisco by its leader Don Falcone. I've been following their output since the debut album New Worlds By Design in 1999 but have sadly missed the two latest releases. Don has always collected some of the best musicians from several genres like space rock, electronic, psychedelic, progressive and art rock, and this release is no exception. Sci-fi writer Michael Moorcock has been involved before but this time his presence is stronger than before. I really like that since he is one of my favourite writers as well as an ex-member of my favourite band Hawkwind! Other musicians featured include people from Blue Öyster Cult, The Damned, The Groundhogs, Clearlight, Hawkwind, Chrome and Arthur Brown's Kingdom Come, just to name a few. There are over 30 people involved altogether so I can only imagine how much work it has taken to get this all organized and produced! Don and his partners have made an amazing job, however. Lyrically Moorcock is involved in most of the 16 songs and he also sings and plays some harmonica.

The BÖC fans (myself included!) will love the classic rock/pop styled tracks like the opener "Hothouse Flowers", the excellent sci-fidelic "In the Future", "Fall in Love", "Back To 1896", "Seven Finger Solution" and the space rocking "To Steal a Space Traveller", perhaps the highlight for me. "Soiree of Fire" is a hypnotic, trippy and tribal-sounding piece that I also really like. The melancholic "Doomed" makes the shivers go though my spine, very effective as well! "Any Particular Interest" is something special too... Oh well, so many great tunes! More electronic side is presented with for example with the sort of Gothic rock sounding "Virtue & Mrs. Amelia Underwood" and "Dark Dominion", still bringing to mind BÖC a bit, though! There are also more atmospheric tracks closer to ambient but nothing completely afloat or ethereal. The use on violin and also acoustic guitar on a track or two adds some folk vibes too. All in all, this is another excellent sounding, interesting and highly enjoyable album by the Spirits Burning collective, well done! If you get the initial pressing, you will also get a bonus disc that includes all the tracks in instrumental form which is cool.