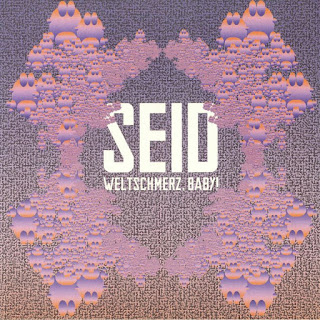 Seid from Norway have been playing their special brand of progressive/psychedelic/space/hard rock for over two decades now. I will always remember how impressed and amazed I was in 2002 when I got their debut CD Among The Monster Flowers Again in my hands. Luckily Sulatron released it on vinyl ten years later. The band has slowly been putting out new stuff after a few years intervals. On their previous, horror/occult themed album Wettlaufers Enke (Black Widow Records, 2016) they changed their vocals into their native Norwegian, and this has remained the same on the latest master piece Weltschmerz, Baby! released last month on Sulatron Records.

I have always loved the way the band mixes together heavy guitar riffs with spacey synths and progressive organ and Mellotron and this album is no exception. The album kicks off with the heavy, groovy and hypnotic "Haukøye" and I am immediately in awe. "Trollmannens Hytte" is a dark, spacey, weird and experimental ambient synth piece that sort of brings to mind Hawkwind's Church of Hawkwind album. The female spoken word story about the devil's music is just great... Wow. The theme continues with the next song "Satan i Blodet" that is a heavy, mid-tempo hard rock track with some cool Mellotron etc. Towards the end things go really spacey in Hawkwind style. Mesmerising stuff! The title track has a spooky, peaceful intro that bursts into fast prog rocking after 40 seconds. This is one of the most energetic and progressive tracks on the album and a really good one. The almost instrumental "Coyoteman" is at first rather atmospheric stuff but grows a bit along the way. Some great melodies and vibes on this one, sounds like Kingston Wall a bit with the mystical, Eastern motives and progressive jamming. Very nice! "Moloch vs Gud" takes us to ancient Middle-East with its hypnotic, very archaic style. The spoken word stuff is very effective as well, and it's great to have yet another totally different track on the album. It seamlessly turns into the last piece "Mir (Drogarna Börjar Värka)" when the drugs really start to work... Actually this is a really nice, melodic and atmospheric instrumental in 5/4 time and highly enjoyable stuff. Once again Seid has made a really amazing, deep, varied and interesting album that you just keep on listening over and over again. Available on vinyl and CD, get your copy as soon as possible!