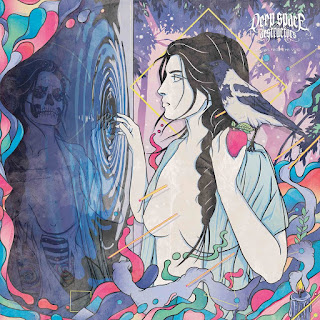 Wow, this Oulu, Finland based heavy psychedelic space rock act just keeps on getting better and better! The trio was formed in 2011 and this is already their sixth release and the third vinyl release on Space Rock Productions. This time Dr. Space from international, improvisational jam group Øresund Space Collective is playing spacey analogue synthesizers on all the five tracks so the flight ticket to deep space really is guaranteed. There are also some other Galactic friends helping out on saxophone, Mellotron, analog space sounds, drones and backing vocals. The basic bass, drums and guitar tracks were more or less recorded live in the studio. The melodic, often a bit mantra-like vocals have great harmonies. I really like the sound of DSD that is sort of mix in between Hawkwind, Ozric Tentacles, Hidria Spacefolk and Kingston Wall with lots of originality as well.

"Psyche Remade" starts off the album in a powerful and groovy manner. I can already feel my conciousness expanding! Dr. Space's synth sounds fit in perfectly. There is a more relaxed middle part and then they go again. Great! "Astral Traveller" is another strong, heavy space rock blaster to blow your mind. "Tyhjyyden Mantra" is sung in Finnish and this is maybe closer to the excellent space metal band Tuliterä in style. The sax adds more progressive and ethnic vibes, though. Superb! "Floating" has a peaceful beginning and then grows into a beautiful, mesmerising space ballad with great progressive passages. "From The Void" ends the album with ten-minutes of hypnotic, mid-tempo psych/krautrocking that brings to mind Circle a bit. And that's never a bad thing in my space log! Later on the song speeds up into a great Kingston Wall styled cresendo. In summary, this is an amazing album with great songs, top-notch playing and production so be sure to check it out! The cover artwork is also brilliant. The vinyl is limited to just 525 copies in total: 190 x black - 205 x light blue - 130 x purple. Choose the best colour for your mind!